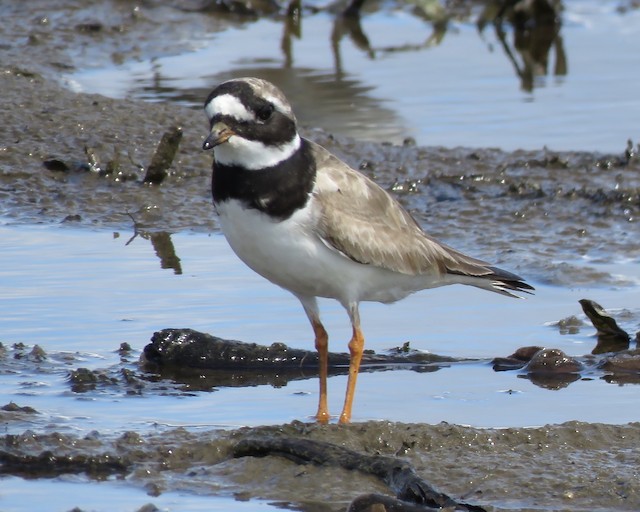 Seen at 11:51 a.m. Continuing mega-rarity. This "adult" bird showed orange legs and feet, an orange bill with a black tip, a broad black breast band, that also wrapped completely around its' lower neck, a black mask that started at the auriculars then went under the eye continuing forward & narrowing through the lores and "reaching the gape" then continuing across the upper base of the bill. A black orbital ring was also visible (barely). There was also a narrowish black band that from one eye , over the front of the head (just behind the white forehead) to the other eye. Just above the black mask and eye was a very nicely and quite visibly seen white supercilium. It showed a white forehead, white band above the black band that included the throat and also wrapped completely around its' neck & it had white underparts. The upper parts and head were brownish colored. ** I was also able to see a slight amount of webbing between only the two outer toes on this bird (see pictures #7 & #8 below) which is a great field mark and is supposed to be considered diagnostic (if you can see it). A Semipalmated Plover has a similar amount of webbing between their two inner toes and even more webbing between their two outer toes. The other rather obvious feature about this bird was it was noticeably larger than the many nearby Semipalmated Plovers. It was still on the mudflats when we left at 1:20 p.m. Very lucky to see this bird in Vermont. Good luck to others that try for this bird.