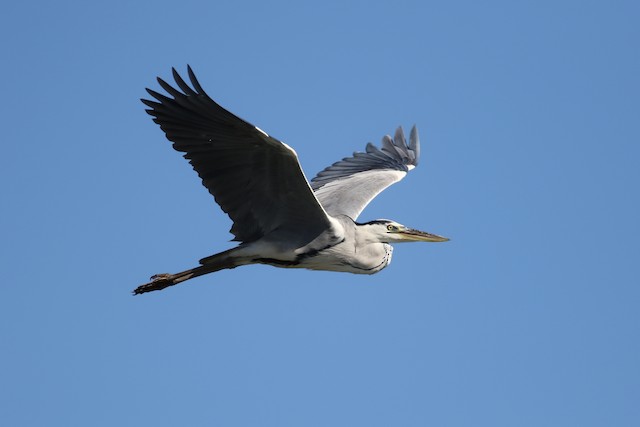 ****MEGA; first lower 48 record. Presumably same individual found in Nova Scotia this summer. Originally observed at base of Whale Point, where upon rounding the corner from the Slough I was immediately able to get on the bird, which was wading in shallow water just before Souza pier. Struck me as a miniature Great Blue Heron until closer inspection in scope, which revealed an incredibly pallid and white bird with no hints of rufous anywhere. I thought momentarily then about the possibility of Gray Heron, before Mark Souza pulled up behind me to talk about a missing pineapple pool floaty that had drifted out towards Whale Point. I tried not to be rude by turning my back and photographing the bird some more, but by the time I could look again at where the bird was, some beachgoers were walking towards us, and had flushed the bird in my direction. I quickly got some flight shots, and this concluded my brief encounter with the bird. Later, once I got back to the field station, I was able to upload the pictures to my computer and realized then that there was a very good chance that my bird had been a Gray Heron. I immediately reached out to RRV, who supported the proposal, and then proceeded to send pictures to Jeremiah Trimble. He, in turn, provided me with the below picture showing the similarities between my bird and the Nova Scotia bird, credits to Tom Johnson. Identification based off of overall structure, being a strikingly small bird with short foot projection in flight, and a proportionally shorter bill. Pencil-thin streaking on dull-white breast and reduced colour on sides of throat immediately pointed towards Gray in the field. No rufous tones anywhere. Bold, contrasting black bar noted on ventral area, bordered by pure white thigh feathers. ***Tuckernuck Island is private property and requires explicit permission from a landowner to access. It should be discouraged to chase this bird, except from boat at Whale Point.***