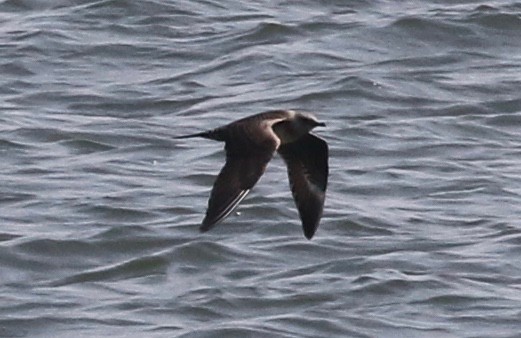 Intermediate juvenile seen well in flight near tern/gull feeding frenzy over Housatonic River mouth. First seen flying upriver, from inside of car just as I arrived. Knowing it was a Jaeger, I grabbed my gear and scurried to east bluff. Upon arrival I immediately resighted this Jaeger near the foraging flock, this time flying south downriver and getting closer to me. It was being escorted by a flock of about 12+ Common Terns. I immediately started taking shots with my camera, as it passed, and continued toward LI Sound. It was in view this time for about a minute, I would guess. I never saw it again. Looking at pix on camera, I knew it was either a Parasitic or a Long-tailed. I immediately posted the sighting to local friends (text), a CT rare bird chat group, and the CT Birds listserv. The Jaeger was sleek, mostly dark, with swift and direct flight; no dallying like the many (juvenile) Laughing Gulls. I never saw it actually chase or harass any other bird. Photos showed only two white feather shafts on primaries on upper side, and a larger white patch at base of primaries on underside of wing (but not as large a patch as Parasitic would show). Also it’s tail was long and thin. I took photos with iPhone of camera monitor and texted them to colleagues. Nick Bonomo, Julian Hough, and Dave Provencher all agreed it was a Long-tailed Jaeger. Timing for a LTJA (late Aug/early Sept) is perfect. Photos. Julian Hough’s comments on those two texted photos: “bird is quite slim and long winged with what appears to be blunt central tail feathers. Limited white on the underwing but the two outer primary shafts are the most pro LTJA feature”. And Nick Bonomo added: “the chesty look that tapers to a thin belly and super long caudal end is very pro-LT. Also that dusky underside with the whitish breast oval is a pattern common to intermediate-dark juv Long-tails. Also if you look closely at the limited white in the underwing, juv Long-tails show a subtle interruption in the white line somewhere in the vicinity of P7-8 (or thereabouts, I forget exactly)”.