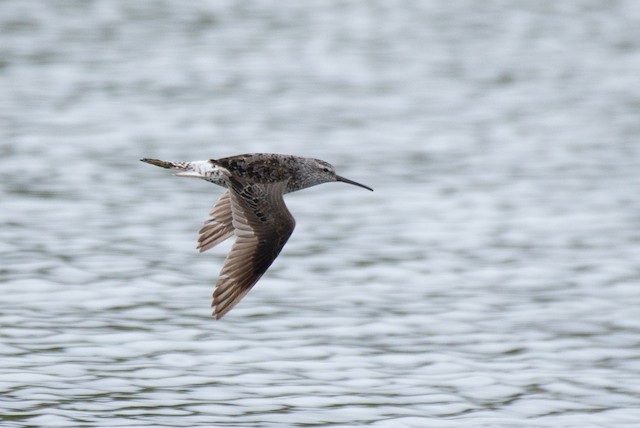 I found this adult [molting out of breeding plumage] Stilt Sandpiper early this morning along the north shoreline of the Santa Maria River Estuary with a mixed flock. The flock included Greater Yellowlegs, short/Long -billed Dowitchers, as well as Least, Western and Semipalmated Sandpipers. This bird was first observed from about 30 meters before it flew in closer to about 15 meters where it foraged for a couple of minutes before flying southeast into Santa Barbara. It wasn't seen again. Compared to the Greater Yellowlegs present, the Stilt Sandpiper was smaller and slimmer, paler yellowish-green legs with a distinctly down-dropped bill tip. Unliked the nearby dowitchers this bird frequently submerged its entire head while probing. The bird’s upperparts were brownish black, streaked with grayish white, buffy-white Supercilium and a hint chestnut on crown. Underparts buffy-white, heavily streaked on chin, throat, and neck and horizontally barred on chest, flanks and belly. In flight the bird exceptionally long legs extended past its tail.