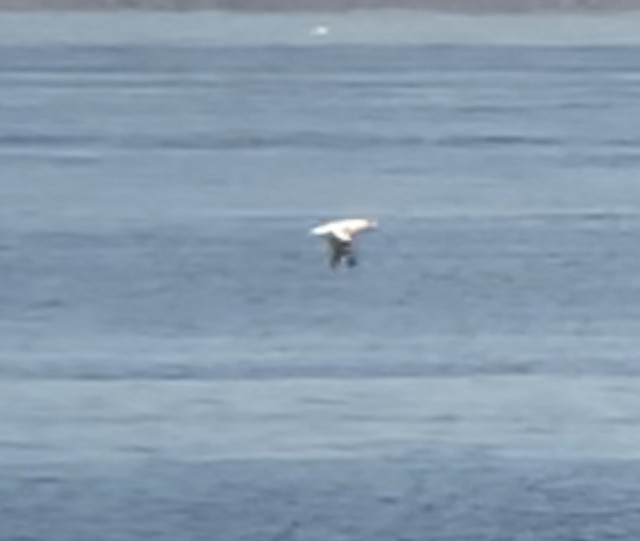 Just after 8:20am this bird came into view to the south flying north through the sound low over the water. I got on it when it was probably just north of the north end of Vashon and watched it until it became a white speck to the north at about 8:30. It passed not far west of the yellow buoy, so a little over a mile out at that point. It was sunny and the bird was in bright light the whole time I watched it. I took video on my phone through my scope. It's not high quality but the bird was close enough that it is useful. I've included stills from the video.    It was clearly a sulid by flight style and shape. It was bright white overall contrasting sharply with black primaries and secondaries forming a black trailing edge that appeared broader on the upper wing than the under wing - I think because the greater coverts on the upper wing were also black. There was a dark area at the base of the bill and I was able to see alternating black and white on the leading edge that suggests the alula was white.   I have no prior experience with either species but I knew to look for bill color and white in the central tail feathers to separate between masked and nazca. I think I saw a thin dark edge to the tail but it was difficult to tell and mostly it appeared all white. There's no evidence of dark in the tail in my video. I'm not sure if a thin dark edge may have been lost against the bright white of the body? I never saw the bird bank to get a different angle on the tail.  The bright light made bill color come in and out somewhat but I focused here because it was easier to see detail than on the tail. I was able to get a good sense for the bill and it definitely had pinkish/orange tones consistent with nazca. It varied in intensity and richness of color from a flat orangish yellow to a fuller pinkish orange. My sense was that the pinkish orange was more representative and that the orangish yellow was when the light was washing out the color. I never got any true yellow or green tones which I think I would have with a masked.  Again, I have no previous experience with these species. But, after looking through a lot of photos afterwards, including the paper Ryan M linked to, I feel like the bill color of this bird makes it a nazca. My video captures some of the pink / orange tones though they do not come through as fully. Interestingly, the second video I took when the bird was north of me shows more of the pink/orange color. The sun was more at my back for this video which I think makes sense in terms of it capturing more of the true color.