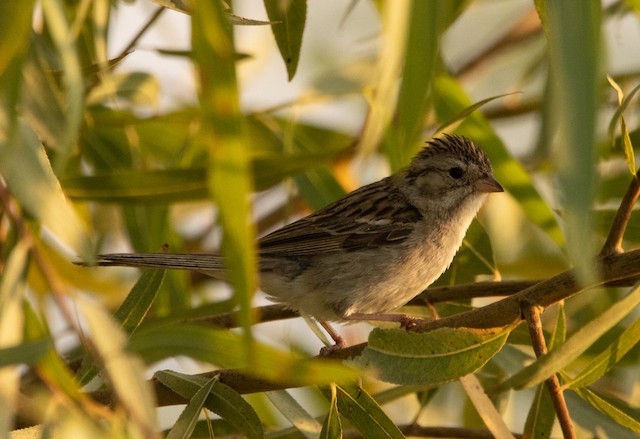 I was cruising the road along the back side of the ponds, when I heard the call note of a sparrow. Right away I recognized that it was a sparrow that shouldn't be here right now (call similar to Savannah). When I stopped and looked the bird was perched on top of a large thistle. Immediately, I took note of the facial pattern and considered Clay-colored. The bird flew, and I proceeded to follow it around for the next 45 minutes, getting decent looks, but nothing super diagnostic. Finally the bird landed out in the sunlight and the whitish facial stripes and belly became much more obvious, along with the grayish nape and light pink bill. Mostly active on the dirt pathway separating the 1st and 2nd pond. The bird responded decently well to a recording, but kept its distance. Did not spook easily compared to many other sparrows. Upon more extensive review, I've changed my ID from Clay-colored to Brewer's. The bird still exhibits key field marks for both species, and I have been able to find photos of both species that look incredibly similar. However, it seems to me that is far less common for a Clay-colored to look like this, than it is for a Brewer's. The very noticeable white facial stripes can be found in Brewer's, as well as the grayish brown nape. The thin brown stripes on the head connect with the streaking of the back, breaking the nape (seemingly less common in Clay-colored). Ultimately, Brewer's is just far more likely (although still quite rare) in this location and at this time of year. There just is not enough making this bird a Clay-colored Sparrow, which leaves Brewer's. Very strange bird, fun collaborative ID process though.