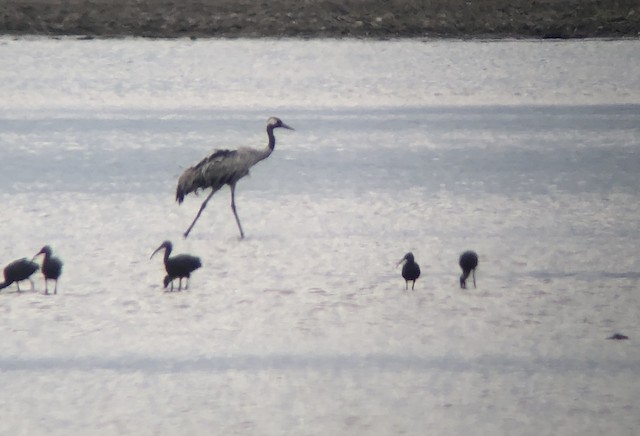 Continuing here since it was discovered this morning by Kevin McKereghan! 2nd Modoc County record, and the 3rd record for California! When we arrived at 41.7462411, -120.4427904 along the SW corner of the playa, the crane was on the opposite shoreline slowly foraging among cattle. Later the crane took flight and landed among ibis at the S end of the playa. From there it slowly foraged across the mudflats and into the short grass. At 7:05pm the crane flew to the E shoreline of the playa but was quickly scared off when 3 pairs of Sandhill Cranes came in. We eventually lost it when it flew low and out of view behind a small hill. At 7:17pm the crane returned to the S end mudflats, and that’s where we left it. Concerning the ID, this looked like a pure Common and showed no signs of hybridization. It was darker gray than a Sandhill and without any rufous staining. Striped black and white face with black extending down front of neck. Small red crown patch. Entirely black flight feathers. It seemed larger; like closer in size to a male Sandhill. Distant photos and a video.