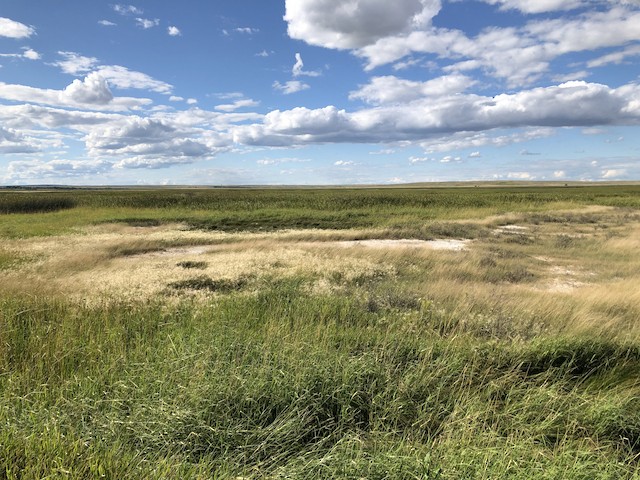 Yellow Rail habitat. The bird was calling from the Carex sedges bordering the cattail marsh in the background.

***very rare; lifer!! Second in eBird for Phillips County (from the same unit of the NWR) and first during the breeding season. Fewer than 20 records for Montana as I understand (how many precisely?). Just before Goose Island Pond on the west end. GPS: 48.36609, -107.69214. Absolute surprise— heard singing spontaneously along the drive as we were cruising along (our main focus was shorebirds, so we were just looking incidentally at other birds at this point), and we were lucky enough to hear the song! I absolutely thought I was hallucinating at first but Janna heard the song clearly as well— a uniquely distinctive, higher-pitched ticking as if two stones were being clacked together in a “one-two *pause* three-four-five” cadence. It continued to sing intermittently for the next 20-30 minutes as we sat there awestruck, while the Nelson’s Sparrows, Sedge Wrens, Sora, and Virginia Rails singing nearby established that this was a great sedge/meadow patch. It mostly did the 5 note song but did a couple 4 note songs that dropped the last note. Poor but diagnostic recording obtained over the wind, which I will upload. Andy was able to get a better recording with a better, non-phone setup when he twitched it later in the evening.