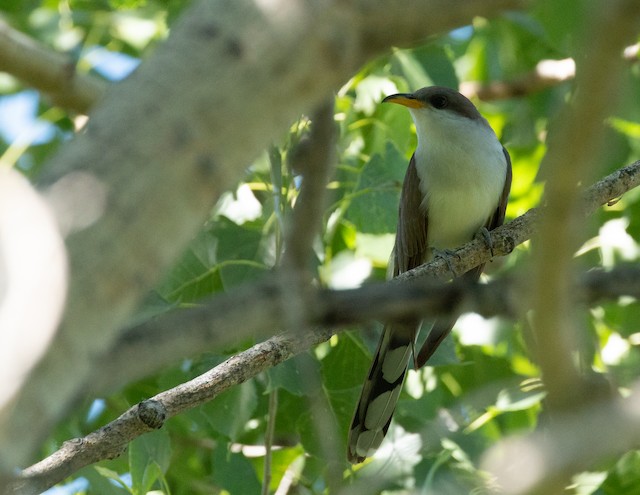 🔴***very rare; first Fergus County record in eBird and seemingly the first in eBird on the Upper Missouri for MT (as opposed to the Yellowstone). AJB photos. We had been having a great run with Black-billed Cuckoos while setting autonomous recording devices for them in mature riparian habitat (having just detected our 5th and 6th individuals counter-singing at the prior point) and after AJB thought he heard a YBCU faintly the other day, we had hope that we would luck into one. As we were tromping through willows, I caught the end of a “Klowp” call series over the noise of our hiking and immediately called out Yellow-billed Cuckoo. Moving cautiously out of the willows, we entered an open meadow patch with mature cottonwoods. Andy spotted the cuckoo in the cottonwood closest to the willows about 50 meters away. Even through the mottled shade of the cottonwood, we saw the *pearly* white breast, crisp yellow bill (when the light hit it), and hint of a dark mask. As Andy approached to get a photo, *two* individual cuckoos flushed from the tree and went low into a stand of willows. In flight, we saw bold rufous throughout the primaries on classic cuckoo body—very long-tailed with long, pointed wings that have a hint of green-bronze iridescence on the coverts (reminding me of this photo from a prior study in flight). We connected with the cuckoos again after setting the recording devices; one responded to a bit of playback with another klowp call series, and we relocated it in another cottonwood tree at the edge of the mature forest. As Andy was photographing the bird in the tree, I saw the second burst to and from a patch of willows, flying low across the ground. The habitat here was excellent— a mature riparian forest with many felled cottonwoods (annoying you clamber over) that created an open, savanna-like woodland and had high butterfly abundance/diversity (which the cuckoos may be taking advantage of). ***Please do NOT use playback if trying for this bird! It will mess up the recording data for monitoring the status of this species in the area. Thank you!***