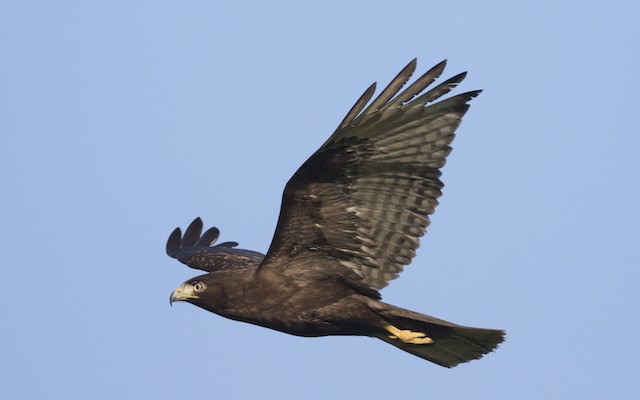 Finally had a chance to go see this juvenile bird, which had been reported since late January. Close inspection of details of the secondaries, primaries, and tail, reveal enough characters to support the ID has Harlan's, though an intergrade with Western cannot be ruled out entirely. Note especially the pattern of the secondary tips, which are dark with white blotches on the inner webs. The banding in the primaries is somewhat wavy, especially on the upperside, and there is a suggestion of mottling at the bases of the outer 6 primaries. The banding in the flight feathers and tail is thicker than what would be expected on Western, and better for Harlan's. Tail pattern in unusual in having thick bands that fade out near the base; uppertail coverts all-dark--also unusual. Solid dark juveniles like this are rare in Western, and more common in Harlan's, though Harlan's usually has a blacker ground color--not always. This bird is at the dark extreme for a juvenile Red-tailed Hawk of any subspecies, lacking any obvious pattern. It really requires close study to see the details needed to confirm the ID as Harlan's, and luckily this bird is obliging when it is in view. This bird's behavior is unusual in two ways: it is very tame, unlike most Harlan's; and it is quite sneaky, staying low, perch-hunting from edge and some exposed perches, but not getting up to soar much.