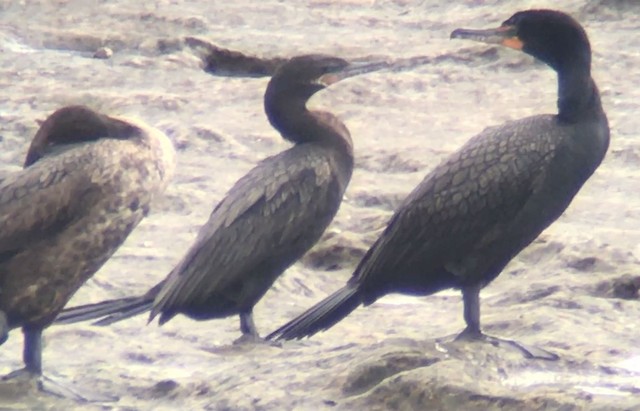 First State Record (if accepted by the GCRC), continuing since first found yesterday by the many times proven to be The Absolutely Incredible Walt Chambers (no surprise there)! Looks like a non-breeding (June-March) adult. --- I had just returned from a supply trip to the car and was back at my scope station on the Alabama side overlook - (small concrete pad in the grass at 31.623167, -85.064655, and probably the best scope vantage point in the below the dam area on either side of the river) - when at 9:38am, Georgia time, Bob Zaremba who had stationed himself on the Georgia side (about 1300 feet from subject bird) phoned to ask me to try to check out a certain cormorant from my vantage point and it indeed turned out to be The Neotropic Cormorant, great spot and thanks to Bob!!! --- We had re-counted the cormorants continually since early morning when there were only about 53 present and the cormorant count had taken a while to double or so back up to about the number that Walt had yesterday, and that is when we first found the bird this morning, after at least 90-100 had showed up! --- The Neotropic Cormorant was located at 31.624819, -85.063168 when we first spied it this morning out on the west edge of the northern area exposed by the low water. --- Handheld phonescoped video screen captures, best viewed on a big screen and/or zoomed up, with most shot at 82mm by 75x scope optical zoom plus max iPhone 7 digital zoom (degrades quality somewhat but does let you see a bird better overall most of the time) for an about 375x digital equivalent through the super magnified heat shimmer and from about 750 feet away on top of the overlook. --- Strong hydropower generation today to begin at 1pm and continue until midnight. Check the hydropower generation schedule for the dam when planning a trip and go well before generation starts as virtually all of the cormorant roost areas flood 20-30 minutes after generation begins and the birds may very well depart and move downriver not to be seen again for a while or until the next day depending. It probably takes about 30 minutes for the water to go back down after generation ceases. The US Army Corps of Engineers hydropower generation schedules for many dams in Georgia are at: http://spatialdata.sam.us-ace.army.mil/hydropower/default.aspx