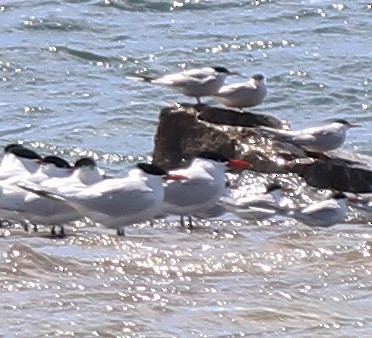 Royal Tern observed loafing with a flock of shorebirds, terns, and gulls on an exposed island of a flooded parking lot in the Henderson Marina in Norfork Lake. An adjacent Caspian Tern in profile provided the necessary comparison for identification. The Royal Tern was in alternate plumage with a fully black crown (slightly peaked at rear) and red bill that was as long as the bill of the adjacent Caspian Tern but significantly thinner. The Royal Tern was slightly shorter and less bulky than the Caspian. Observed through 20-60x scope at 100 yards for about 2 minutes before it took flight and flew north across the lake. Two quick photographs while it was grounded. Unfortunately, I could not pick it up when the multi-species flock of 100+ individuals flushed. The large gulls and Royal Tern flew north toward Bidwell Point and did not return while I was in the Henderson Marina. The shorebirds, Caspian Terns, Ring-billed Gulls, Common Terns, Forster's Terns, and Black Terns returned to the exposed island.