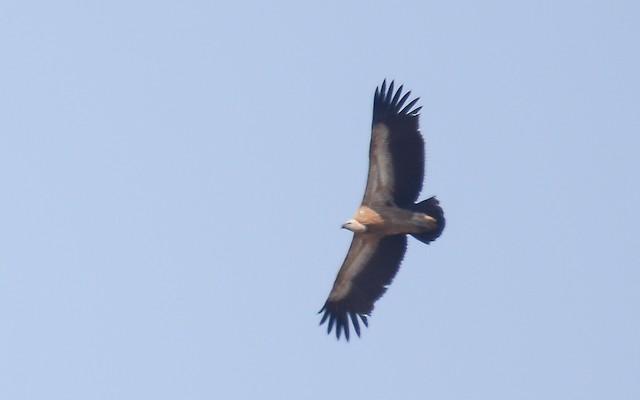 This note describes about the sighting of Griffon Vulture in Masin agudi of South India. I sighted this in 2017 and recorded the photograph. To utilize the lockdown period, I was checking my old unidentified pictures taken before on May 12th 2020. I was surprised to identified one picture I have taken in 2017, which looked like Griffon Vulture. I referred books “Birds of the Indian Subcontinent by Krys Kazmierczak”, “Birds of the Indian Subcontinent by Richard Grimmett” and “Birds of Prey of the Indian Sub Continent by Rishad Naoroji”. I could confirm the pointers with reference to the above sited books. The pointers are 1. Usually has a distinctive Rufous or cinnamon tone to the plumage (especially under parts) 2. Head and neck covered in short whitish features (Distinguished from similar Indian vulture by Paler head and neck). Juvenile has a mainly whitish, rather fully feathered head and neck. 3. Differentiated from Juvenile Indian vulture deeper, shorter bill and more rufous colour. 4. Extensive down on head; whitish underwing coverts. ( this bird prominently white band on underwing coverts) 5. Fulvous red brown under body (paler than adult) has prominent buff- white feather centres, giving the body a distinctly streaked appearance.  6. Rufous brown axilliaries and leading edges. 7. Dark flight feathers and tail;Serrated trailing edge to wings and tail. 8. The shape tends to be subtly different from that of Himalayan Griffon; the head appears slightly larger, the body less barrel shaped, and the tail slightly shorter. 9. From below easily confused with juvenile and particularly young subadult Himalayan Griffon. the underside is slightly pale and more rufous tinged,and shows significantly thinner and less distinct pale streakes than in Himalayan Griffon. With the above pointers, my picture indicates Juvenile Griffon Vulture. As per e-bird record, there is no records in Tamil Nadu, but some records seen in Andhra and Telangana .  In the book “Birds of Prey of the Indian Sub Continent by Rishad Naoroji”, there are some records in Karnataka and Andhra Pradesh. I sent my picture to some of the experience birders to get their feedback. They have confirmed it as Griffon Vulture. Thanks to Ashwin Viswanathan, Nirav Bhatt, Sarayu Ramki, H Byju , Sharang and G Parameswaran for their valuable opinions.