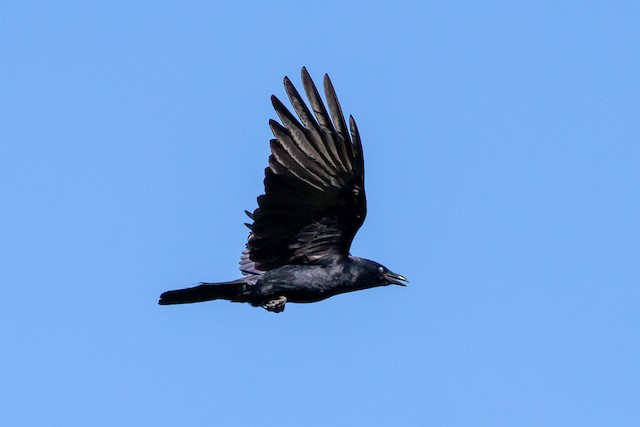 Giving nasal 'awwr' or 'awwp' calls and occasional short nasal 'uh' calls. There appeared to be a single bird circling the area. In response to playback it performed a 'V' wing display with feet dangling. This is a short glide with some quick wing beats interspersed. Longer and narrower tail than nearby (calling) American Crows. Photos show p9>p6 and only four longest fingers as opposed to five on American. This bird also appeared smaller and shorter billed with smaller feet than American Crows. The bird did not show obvious wing molt; however many of the American Crows were in wing molt, replacing inner primaries especially. The Fish Crow did appear to be renewing outer rectrices. Single birds to one or two pairs have summered at this location for a few years now. I hadn't made but passing attempts to find the birds before today.