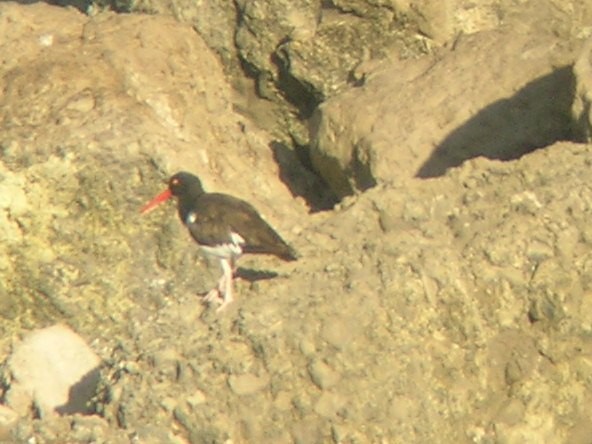 The bird was watched for about 30 minutes at ranges between about 250-400 yards. Fortunately, the light conditions were excellent with a low late afternoon sun behind me and no heat haze. As a result, I was able to use the telescope at 60x and get quite good views. I took a couple of digiscopes, but unfortunately these were at the longest range and at a lower magnification, so they just show a black-and-white oystercatcher. The views were of the bird feeding, resting, and occasionally opening its wings as it jumped to avoid a wave. I missed seeing it both times it flew because I was trying to set up for digiscopes. The bird was feeding on exposed rocks along with Black Oystercatchers. Description Size and Structure: A large shorebird with a long straight bill and medium-long legs. It appeared identical to the accompanying Black Oystercatchers. Bare part coloration: Essentially identical to the accompanying Black Oystercatchers. The legs were flesh-pink. The bill was bright orange-red. The eye-ring was bright red and the eye pale. Plumage: The head, upper breast and upperparts, except for the rump and uppertail coverts, were black. Black mottling extended a little way into the center of the lower breast. The black of the mantle, scapulars, and wings had a dark brown wash, which made these areas contrast with the pure black of the head, neck, and breast. The rump and uppertail coverts were white. There were obvious dark blotches towards the tips of the uppertail coverts near the tail. These were visible not only when the bird opened its wings but also along the base of the tail from a side on view. The wings were black with a broad white bar along the secondaries. This bar did not appear to extend very far into the primaries if at all. However, I only saw views of the wings partially open making it difficult to see how far up the inner primaries it went. The underparts were entirely white from the lower breast through the vent, including the undertail coverts (note that the apparently dark vent shown in the digiscope is an artifact of the photo caused by shadow). The white on the breast extended up on to the ‘shoulder’ area around the bend of the wing.