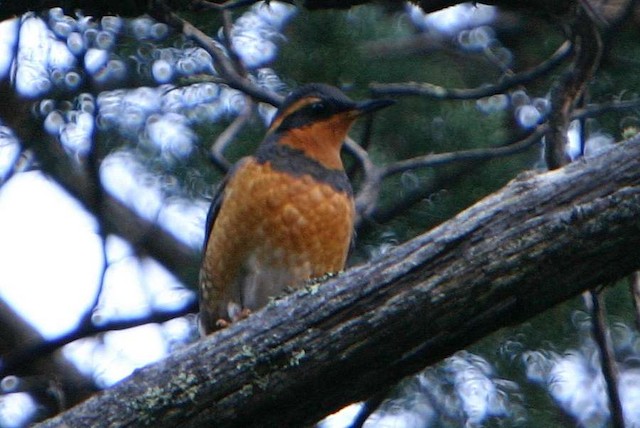 From my TBRC report: "At 11.35am on 1 Feb, I first noticed a robin-sized bird flying towards me from the cabin/springs and going up canyon. The first thing I noticed was the bird's underwing which had a creamy stripe from body towards primaries; underwing was otherwise darker. I relocated the bird after it landed ~40 yards from me, at a somewhat obstructed view. Thru my binoculars, I saw bird's orange scaly breast with some white on the very lower belly. Face and throat were partially obstructed but I did notice orange'ish supercilium over darker eye/auricular stripe. Also had a glimpse of dark breast band going from shoulder to shoulder, against otherwise orange breast. I moved to get a better look and completely lost the bird amongst flock of 8+ Mexican Jays, 6+ Acorn Woodpeckers and a few Dark-eyed Juncos. I walked back up the canyon searching for the bird but could not relocate. Eventually (10 minutes later) returned to where the trail crosses the stream just upstream from Boot Springs and noticed the bird ~40 yards ahead of me over stream, towards stream, Bird was partially obstructed at first but I moved a bit and got ~20 seconds of a look at it facing its breast and also a good side view. Upperparts noticed this time where a dark blackish blue. Wings were same color with noticeable orange markings on wingbars and mixed in on tertials. Blackish breast band seen again going from shoulder to shoulder, dipping slightly in the center of the breast. Face also strongly marked with orange throat and supercilium separated by dark black/blue eye & auricular patch. Legs seemed orangish, bill was dark. Bird quickly flew upslope and I could not relocate it in the next ten minutes of searching. Early on 2 Feb, I again had a brief look at a distant (~50 yards) perched bird that flew up canyon. I lost that bird again and but later had 2 unidentified robin-sized birds (the VATH was the only bird that size that I had seen the last 2 days in the canyon) fly above and past me which I was sure was these birds. 15 minutes after that sighting, I again found the 2 robin-sized birds flying and was able to verify that one of the them was a Varied Thrush. They had flown to a side canyon 30 yards up canyon from the Juniper Trail intersection and I bushwacked up that canyon a bit. Eventually I found 2 Varied Thrushes (both males) side by side coming to a small water puddle in that side canyon. Description for them reads like it did for the bird on the previous day. The 2 birds seemed nearly identical, though they seem to have a slightly different amount of white on the lower belly. They didn't stay in this location for very long and I was able to photograph one (attached) just before they flew back to the main canyon, and I never relocated them again."