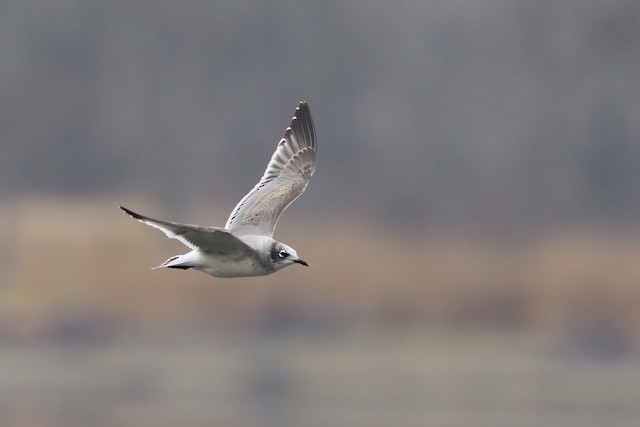 Located today by Don Mairs and Bob Lewis at the west end parking lot. The bird was extremely cooperative, affording excellent views. Today I could see much more detail than yesterday. This is a small gull with short body. Its bill is short and black; legs dark brownish-red, appearing entirely dark at a distance. The head showed a white forehead that was sparsely marked with blurry dusky streaks. These melded with the sooty black rear crown and rear auriculars. White arcs around the eyes stood out in the dark that surrounded it to the rear. Nape and hindneck washed grayish. Back medium dark gray; upper wing coverts edged brownish, and tertials mostly brownish and edged white. The primaries were long, black, and tipped with small dots of white. The foreneck and underparts were white. In flight, I could see white wing linings, pale gray inner primaries and black only on the outer parts of the outer primaries. The rump and most of tail were white. A black subterminal band crossed the tail except for the outermost rectrices, which appeared to be white to the tip. The Franklin’s Gull, like the Hudsonian Godwit last year here in November, was snapping at small invertebrates, presumably some Dipteran emergence. The Franklin's Gull foraged along the muddy shore and on the water’s surface by picking lightly at something small. I watched it snap upward into mid-air as it walked along, apparently taking flying insects (many in the past few days). These late emergences and flights seemed to be the passion of the Ring-bills too. I also saw the Franklin’s take something in mid-flight, reaching upward with its head and bill just like Bonaparte's Gulls do when feeding aerially in flying-ant emergences. Franklin’s are inveterate bug-eaters, but they are also like phalaropes, wintering at sea and snapping up surface micro-stuff.