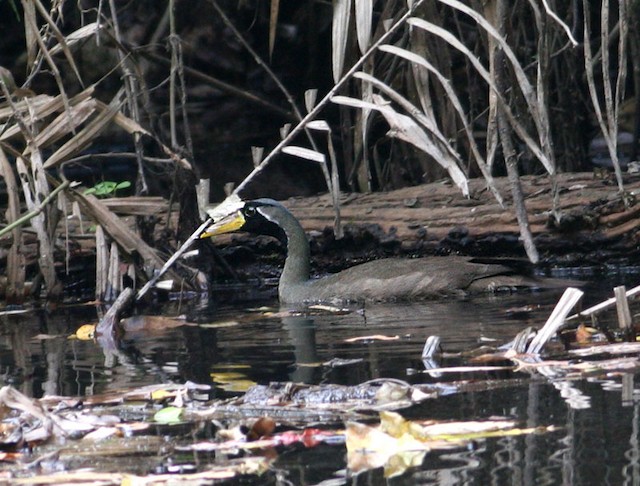 A 'mystical' bird wanted by every birder! . To see a Masked Finfoot easily is one of my top experiences in the field of ornithology. It all started with an email from Robert Hutchinson about a week ago enquiring if I knew anything about a Masked Finfoot at Khao Yai. I thought it must be a hoax but Robert insisted and told me an image was to be found online. I googled the net and found the image and accompanying text. I was a bit shocked that this incredible sighting hadn’t reached my ‘ears’ until 3 weeks after it was seen. I got on the phone and talked to Guide A, who works as a local guide at Khao Yai. I told him of the find. A few days later another Thai guy sent an image of the same bird to Philip D. Round who promptly sent out a message alerting everyone. I immediately called Guide A and impressed upon him the need for urgency. Then a couple of days later, Guide A, excitedly called saying how he had seen the bird after several days of trying. Next day I went to Khao Yai and placed myself at the given spot. I sat for 8 hours without seeing even a hint of the bird. There were many a thought going through my head. There were many photographers and birders there but to no avail. All I could do was speculating to its whereabouts and behavior. I concluded that it must be moving around between different bodies of water within the park. (In actuality it simply sits still inside the vegetation on a river bank). My comfort was that I got to see a couple of Siamese Crocodiles in the river. The crocs origin is unknown but someone released the crocs a few years back and they have flourished well. The next day I was back to work in Bangkok. But in the early morning I got an email from Robert saying how he had seen the bird for a couple of minutes in the early morning. After 12 years of fulltime birding in SEA he finally got it! In the afternoon, Guide A, called and said he had seen the birds for 2 hours at the same spot as the day before. Meanwhile, Bengt Legnell, my Swedish friend, had come for a visit to my house. We both agreed to try the next day. Another night with precious little sleep followed. This time I got there real early but again, no bird! Another set of photographers were present and I promptly asked one to give me a call if the bird showed up. We went elsewhere. Every time I got a phone call or an SMS I excitedly looked at the phone. Then, suddenly, a call from a Thai friend, he softly whispered ‘it’s here’. I suddenly overcame my weak knees, and ran like a madman along the trail to get to it. Once there, the guy greeted us with: ‘it is gone’……..my, oh, my…what a run! We set down in the riverside vegetation and feverously scanned the surroundings. No bird! Back to waiting again. About an hour or so later my eyes caught something yellowish within the thick vegetation on the opposite side of the river. Hmm, not the shape of a leaf. Then, very slowly, my eyes started focusing on a head, a body and, there it was! MASKED FINFOOT! Such an incredible feeling to see this MEGA RARITY in a true tropical forest. The bird stood still for ages, only moving its head. Those legs are big but I saw no webbed feet. How does it swim? After a long wait the bird slowly arose and went into the water. He liked to keep next to the river side and stayed mingled with vegetation. Conditions were not very good for photography as it was dark and I didn’t have a tripod. The bird seemed to be extremely leery of any noise or movement. Always on guard. For the following couple of hours we were able to see it swim, clean its feathers and finally retreat where it came from. Boy, did I ever feel elated. Easily one of the best birding experiences I ever have had. Nothing of my own doing, simply being there and being part of a wonder! I felt like I had partaken of one of the deep mysteries of God! Peter. Elevation: 761 m. Date added to IBC: June 21, 2016.