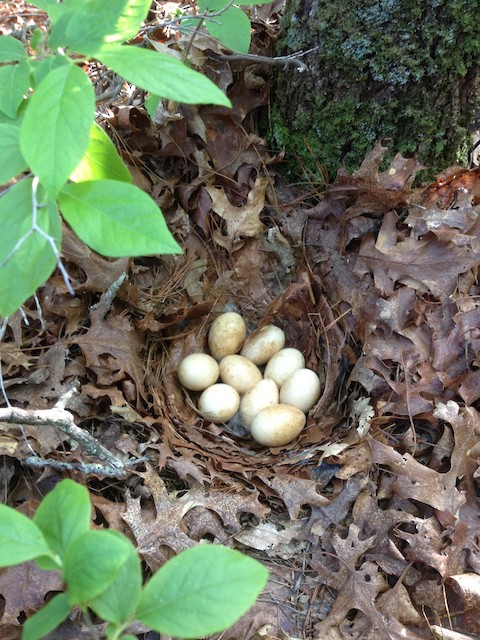 Photos that we took.

I originally reported this bird in 2012, but it was not confirmed. This time I am adding some more details so that it will hopefully be confirmed. Original report: http://ebird.org/ebird/view/checklist?subID=S19364205 The most amazing and unbelievable part about this was that we found its nest. The grouse was flushed and easily identified. Loud powerful and fast wingbeats with the obvious black tail band. No other bird is the size of a Ruffed Grouse in the area and nothing else looks quite like a grouse around here. Very easily identified. Two photos were taken of the nest. Ruffed Grouse were spotted several times around this date in the vicinity. Also, our woods are as good as it gets for grouse habitat. On a sad note, around this time a Ruffed Grouse flew into out French door on the back porch and died. Photos were taken of it. Now in 2015 we have not seen a Ruffed Grouse since 2012. It is really disappointing to see this species disappear from the area as it was a specialty of our woods.