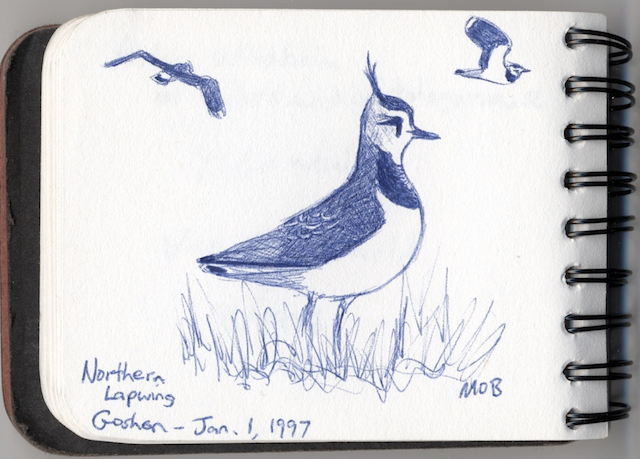 Seen from about 12:30 PM until late in the afternoon (others saw it until dusk). First seen from the back porch of the CMBO Center for Research and Education as the bird flew south. At this time I was accompanied by Louise Zemaitis and Clay Sutton. The three of us promptly drove south down Route 47 in search of the bird and relocated it in a field about one mile to the south (0.7 mile north of Goshen Landing Road). It remained there for a short time, then flew south again to an adjacent field. It moved several more times before it settled in a field 0.5 mile north of Goshen Landing Road where it was studied at length by the three of us as well as dozens other birders who had been notified in the mean time. It stayed a good distance out in the field, perhaps 100 yards or so, allowing good views only through a scope. While standing, the bird resembled a killdeer in size and structure but looked somewhat larger and much chunkier with a more upright posture. The breast and belly looked quite rounded and fat. The underparts were bright white except for pale but rich orangy-buff undertail coverts. On the upper breast/lower throat there was a broad black bib which was faintly flecked with white in the middle. The black color of the bib did not continue around the back of the neck. Rather, the back of the neck was concolorous with the rest of the upperparts. The bill was very small, slender and blackish. The head was very square with an especially squared-off forehead. The crown was blackish bordered below by a narrow, curved, whitish supercilium. From the rear end of the cap protruded several blackish plumes of slightly greater length than the bill. These plumes splayed outward to form a sparse, shaggy crest. The eye was small and blackish and was ornamented by several dark marks. A narrow grayish post-ocular line extended behind the eye and below that, a bold black line of equal length extended back and slightly downward from the eye. A third mark was a shorter black line extending straight down from the eye. The remainder of the face was whitish, shading to dull buff toward the back of the head. The upperparts (including nape) were dark greenish with a slight bronzy tint. The tertials were slightly paler and browner than the remainder of the back. The blackish primaries extended slightly past the tertials and contrasted with them. The tail tip fell very slightly short of the primaries but extended past the tertials. The scapulars had narrow reddish-buff tips, most obvious on the lower, rearmost scapulars (and perhaps absent on some of the upper, foremost scapulars). The wing coverts looked equally dark to and concolorous with the scapulars but had no apparent pale tips. In flight, going away, the bird initially reminded me of a Killdeer but looked chunkier, especially fatter-chested, and seemed to have broader-tipped wings. As it turned slightly, the wings took on more of the classic paddle-shaped effect at which time I was reasonably convinced it must have been a Lapwing (though no color pattern was visible at first). The wing strokes were snappy and deep. In better light, a bold, two-toned underwing was obvious with white wing linings (restricted to the under secondary coverts) and dark flight feathers and under primary coverts. There were small but obvious white spots at or very near the tips of the outer several primaries. The rump and base of the tail was white contrasting sharply with the dark back and mostly blackish tail. The black breast band, buffy undertail coverts and black facial markings were also visible in flight. Call given several times in flight was a thin, squeaky, whistled "weee-it".