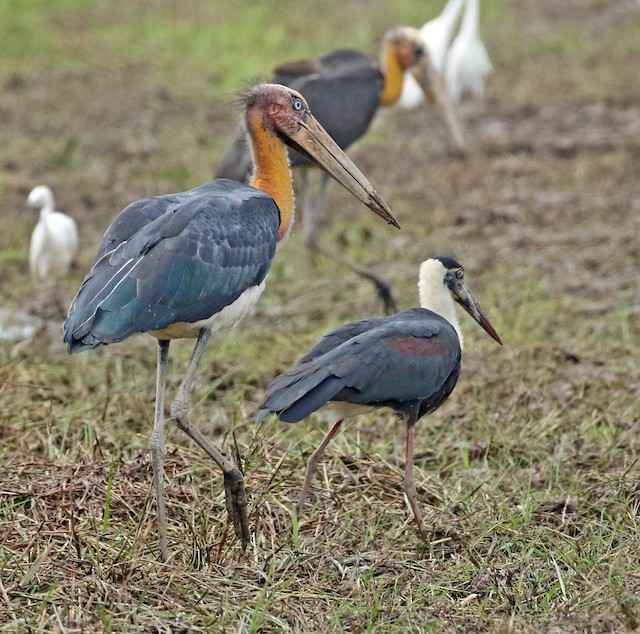 Flew in from the east at 10.05am and landed in a field being ploughed, where it fed with egrets and adjutants for a 2+ hours before flying off at 12.25pm. I watched it land in another field being ploughed, but on driving over there, the bird was nowhere to be seen, so I assume it must have taken off again while I was driving. Not relocated despite the search continuing till dusk. Initial views were of a crane-like bird, flying with neck outstretched. The white neck reminded my of White-naped Crane in flight. Once on the ground, it fed vigorously, and was therefore quite difficult to locate, as often only the back was visible. Markedly smaller than adjutants (only about the size of an Intermediate Egret), and the upper parts were distinctly blacker than adjutants even at a distance. It fed by constantly probing or picking at the surface of the ploughed field, quite unlike the egrets and adjutants, which hunted for prey by sight. It appeared unbothered by the tractor, and would run out of the way when necessary, but it was alert and wary of people not in vehicles. Appeared to be in primary moult, and, from what I could judge, to be an adult. Bill was grey (mud-covered?) but rather bright red toward the tip. The iris was pale grey and the legs pink. Forehead white, crown glossy black, Ear and facial area largely bare. Skin dark grey. Neck white and 'woolly', looking remarkably like sheep's wool. Breast, belly and base of neck black, strongly glossed violet. Vent, undertail coverts and tail white. Entire upperparts at rest black, with marginal coverts glossed green and lesser coverts bright purplish-pink.