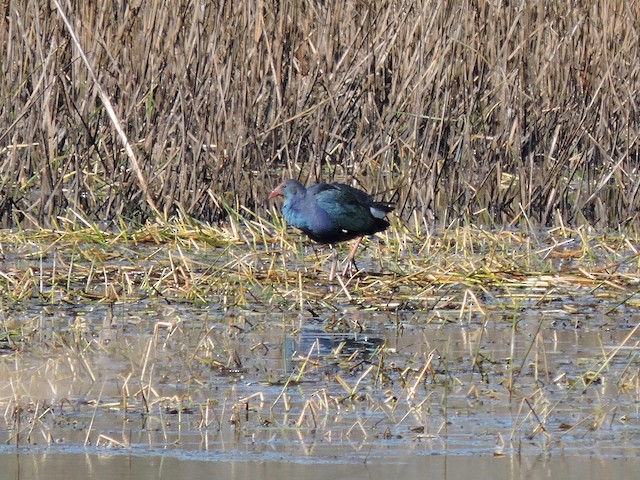 Huge Swamphen with iridescent blue plumage, red legs, and red face. Mac and I first spotted this bird standing on matted reeds in a very exposed location. Initially, we thought that the bird's left foot was tangled in the vegetation, as it was rotating in circles to forage. Shortly thereafter, we noticed that it was slightly moving and that it's leg was actually badly broken. After posting to GABO, we contacted the Georgia Department of Natural Resources with details about the sighting. While waiting for their arrival, we remained at the bird's location and observed as it fed continuously on reeds in its immediate surroundings. During this time we also noted that the bird had no bands or markers of any kind on its legs. GADNR's attempt to capture the bird led to the bird flushing, proving it capable of flight. The bird evaded capture, somehow tucking into the cattails despite its mangled foot. The last that we heard, the bird was still at large, though it was not visible when we left. Photographed here: (31.3438917, -81.4479325).