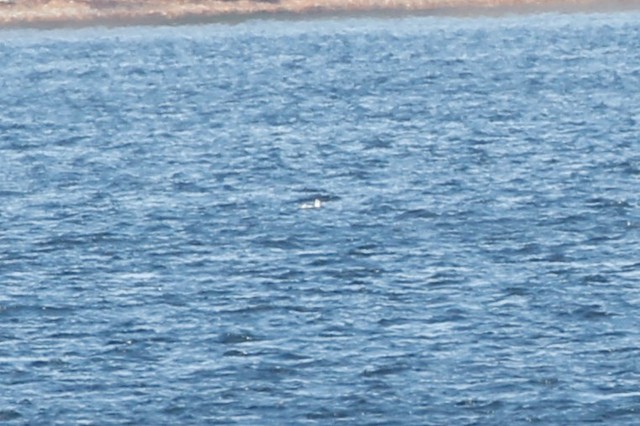 LIFE BIRD. Small pale, plump, gray-backed phalaropes way out on the choppy reservoir. Shorebird wing shape. Very pale. Distant scope views. Apparent nonbreeding adults. Watched them for duration of checklist - they were the first birds I found. Extremely pale gray backs and whitish underparts visible. No barring or markings evident. I have photos but they’re not particularly diagnostic due to the birds’ distance. (See below.) Views through my scope were better than through my 100-400 lens - the birds were identifiable as shorebirds, not gulls, ducks, or the undifferentiated blobs these photos show. Occasionally I was able to see the heads and backs somewhat clearly, and these birds lacked the patterning i would expect on a Red-Necked Phalarope. Shape and behavior was wrong for a Tringa. Greater Yellowlegs can and do swim, but these birds had a more squat profile and were alone in the middle of a huge reservoir not near any GRYE foraging habitat. Also lacked any visible markings on the sides/flanks/breasts. Studying the birds for half an hour I was able to eliminate Bonaparte's Gull by shape, wrong for any gull, and especially wing shape when one of the birds raised its wings. which clearly belonged to a shorebird (thin, somewhat pointy,) and not a gull. Through the scope i could see that the birds lacked the white outer primaries of a bonaparte's gull. I could see the pale stripe across the base of the flight feathers on the outerwing of the one bird that raised it's wings, which is one of the factors that led me to realize I was looking at phalaropes rather than gulls. Bonaparte's is regular at this location in small numbers, but these birds weren't shaped like BOGUs and weren't really behaving like them either.