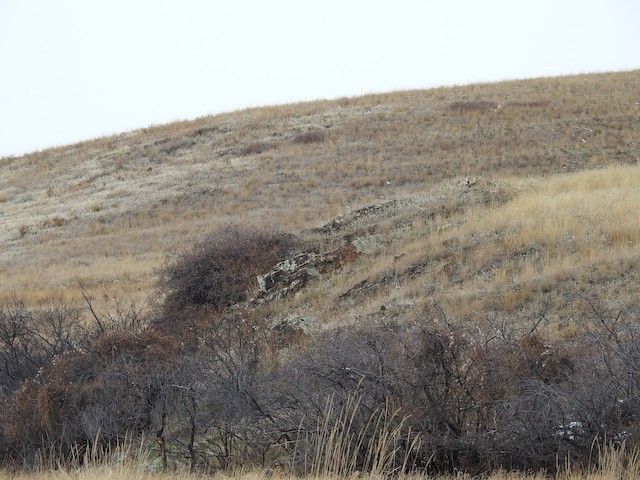 First observation at 1458. 20 counted on property. Seen from reach 4, south of the stream at ca 3-5x shrub height, flying S and then NW, in a loose and slowly undulating flock. Ca waxwing-size birds; first impression was of triangular wings. Grant Hokit saw the birds land near the photo point, on or close to the rocky outcrop N of the stream near several Rhus trilobata bushes. We backtracked to that point and tried to find them, but neither heard nor saw the birds. Definitely not EUST based on shape and undulating flight pattern. When I initially saw them, I wondered about waxwings, but eliminated those because we watched carefully but neither saw the birds fly off again nor saw them perch in shrubs. This indicated that they were perching in the grassland. The slowly undulating flight suggested GCRF to me immediately. Based on behavior/habitat, the other possibilities were SNBU or LALO. Managed to get one photo of part of the flock in flight before they landed. Eliminated SNBU based on lack of white wing patches. Identified as GCRF rather than LALO based on translucent gray flight feathers, correct rather-pointy wing shape, dark overall underside appearance, and faint suggestion of grayish head coloration (on edited, lightened copy of photo). Detections (number 15-minute intervals in which the species was detected): 1 on property.