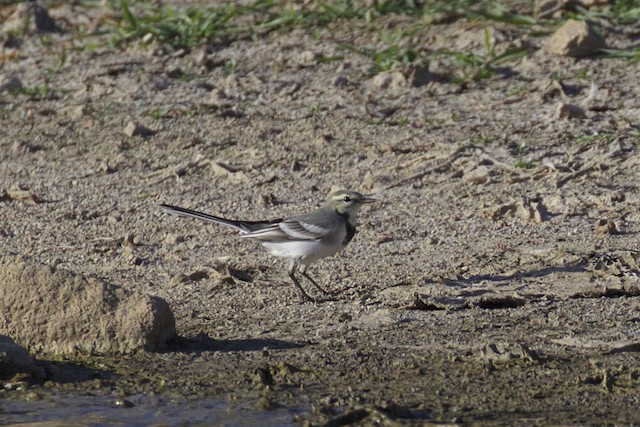 First record for San Clemente Island. Last night Nick Lethaby reported hearing and seeing a White Wagtail flyover while at Santa Barbara Island. I, half-jokingly remarked that perhaps we'd find it at Lemon Tank upon our return to SCI this morning. Well, we did. While scanning the shoreline with a scope, Nicole and I picked out a dowitcher, Killdeer, and then a WHITE WAGTAIL. Immediately recognizable as a White Wagtail: a gray backed, pipit-like bird with a long black and white tail, a thin black line through the eye, a black bib extending down from the neck, and white below. The gray back extended up the mantle and into the crown, where the pale forehead and supercilium began. The face and throat had a bit of a faint yellow wash. The central tail feathers were black, with the outer tail feathers white. The wings were gray with two rather bold white wing bars, the greater coverts gray, while the primaries and secondaries appeared black with bold white edges. Legs black. It foraged along the shoreline, holding its tail horizontally, occasionally pumping it. While walking it strutted like a pipit or pigeon does, pulling it’s head back and thrusting forward, occasionally accelerating (running) towards prey and shooting its neck out to snap at flies(?). When in flight it would call, what I recall being only mono-syllabic, “pit,” but I am now unsure of the specifics of that call. It showed an undulating flight style, with a slight climb as it flapped, and then a small dip as it tucked its wings shooting forward.