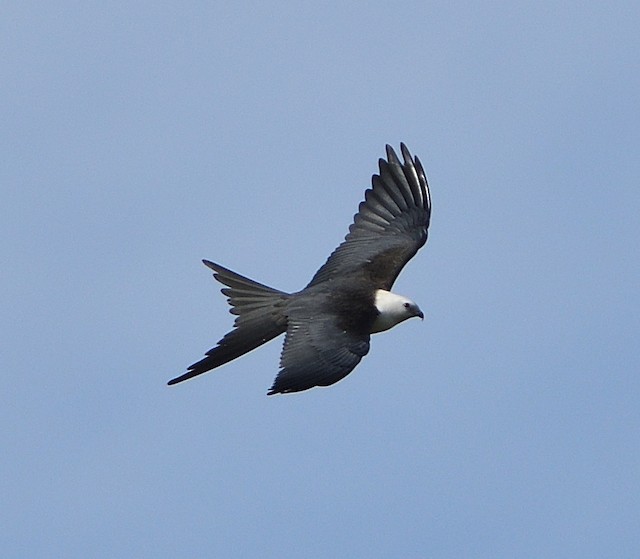 This bird was reported without many details to Maine Audubon in the past day or so. Doug Hitchcox and Fyn Kynd followed up on this report and amazingly found the bird this morning. I arrived in the early afternoon and saw the bird after a brief scan at the intersection of King Street and The Ln. The bird was to the south-southwest over the trees along the Dennys River. It dropped out of sight; so I looked along Route 86 to the west. Shortly after crossing the Dennys River, I spotted the bird over the trees at the edge of a field and bordering the river. This is one of those birds that is instantly recognizable by shape and pattern--an elegant long-winged raptor with a deeply forked tail. The upperparts and tail were blackish; the underparts, including entire head, were snowy white. In good light, I could see a darker, blackish bar across the leading portion of the upper wing. The secondaries seemed shiny and glossed with a slightly paler grayish bloom. There were times when these dark feathers of the upperwing seemed to be glossed purplish or bluish. Eventually, we saw the bird directly overhead at close range and could see small yellowish to pinkish-yellow feet, a dark gray bill with a pale gray to blue gray cere. The eyes were dark red. The underwing pattern was distinctive in being snowy white across the wing linings (lesser, median, and greater coverts of underwing). The rest of the wing, the remiges, were black, as was the entire tail. The bird played on the wind as it hunted flying insects. The kite sometimes made rapid banks and turns to zero in on prey. I could not actually see any of the prey, but when the bird grabbed something (apparently) it reached forward with its feet and met them with its beak. It appeared to consume its prey on the wing. As photos show, these were small flying insects (not dragonflies or damselflies as far as I could tell). The bird seemed to find most of its prey over the tops of the trees, but occasionally much higher. After meeting some locals, I learned that the bird had been seen by them since about September 7 (a rainy day that coincided with the remnants of hurricane Dorian passing east of here into Nova Scotia). This may be coincidence given other recent northerly Swallow-tailed Kites well away from the storms influence.