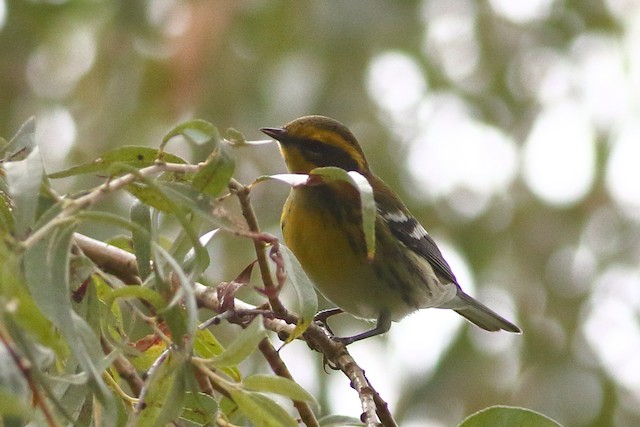 ***Mega. Initially we spotted this bird traveling with a flock of chickadees and other warblers. When it came into a willow overhead, I noticed it was a small, long-tailed warbler with two white wingbars against a bluish wing, and a dark mask isolated by a yellow face and throat, which indicated a warbler in the virens complex. Immediately I said to Max and Francis, “hey what is this?!” in an excited manner. Both got on it quickly and I told them I thought it was a Townsend’s Warbler. At this point we were trying to think of any other remote possibilities, such as a hybrid or aberrant individual. However, further observation confirmed our identification. The mask was much too dark for Black-throated Green. The posterior end of the mask barely connected to the nape, and the lower edge was rounded and not connected to the breast streaks as on Blackburnian Warbler. The lower eye arc was huge. The throat was yellow except for a few black patches, and the yellow extended throughout breast. The side streaking was dark and reached far down the flanks. The undertail coverts had a few fine streaks and there was no yellow. Three to four of the outer tail feathers were white. Eventually we saw that the bird had a solid olive-green cap and back. I heard the chip a few times, which to me sounded indistinguishable from a Black-throated Green. The bird was first observed on the boardwalk along the Jerdyn Trail. We observed it for 5-10 minutes before it flew out of view, at which point we exchanged celebratory high fives and a group hug, and made a few phone calls. Francis refound the bird along the Abbot Trail, where we followed it for another 15 minutes. It actively foraged among a flock containing chickadees, redstarts, Bay-breasted Warblers, a Yellow Warbler, and a few others. This is the first September record for Massachusetts, and early relative to previous records. One earlier record comes from Nantucket in August 2018. The plumage matches either an adult female or first fall male, although based on the greater likelihood for first year birds to wander, I would guess it's a first year male.