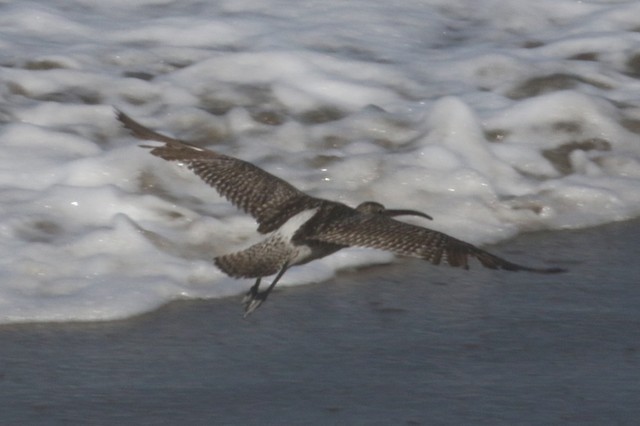 Found by Paul Saraceni, seen by several through about noon and then again later this day at south end of Funston Beach. Most probably "Siberian Whimbrel" (P. p. variegatus) but looking on line I can't see that nominate P. p. phaeopus is eliminated due to substantial variation across Eurasia (with exception of "Steppe Whimbrel") and overlap of characters. See also Heindel 1999, North American Birds, 53:232-236. Adult, having commenced primary molt - p1/p1 new or growing, p2/p2 dropped. Gaps in p4-p5 area of both wings appear to represent adventitious feather loss or breakage rather than molt. Outer primaries and secondaries show "molt clines" indicating at least one previous prebasic molt and a bird (ASY) of 27+ months of age. Excellent bird - seen by me briefly sitting on beach (where I could not tell it from the 6 hudsonicus WHIMs present in the glare of the sun) and then flew directly under our observation position (about 30 m away) into better light. These photos taken by Paul Saraceni represent what I saw in the field.