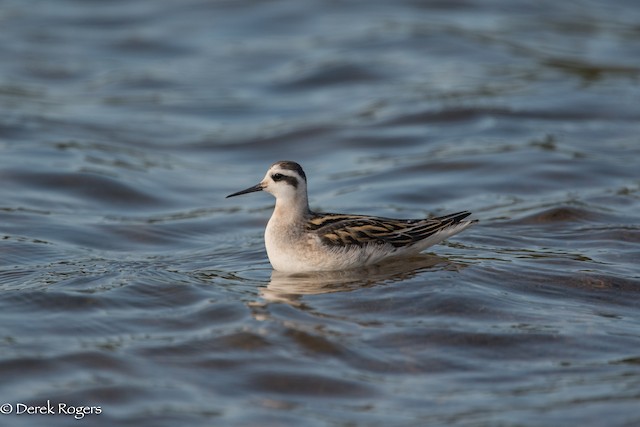 *Rare. Locally scarce but annual on the lake (more so on the VT side) when detected during fall migration. First record on the eBird map for Noblewood Park. Stunning, crisp juvenile observed at length as it successfully snatched moths off the lake surface along the south side of the main peninsula. When I arrived, the bird was located out at the point of the south sand spit (south side of the river mouth) but was chased off by an aggressive Ring-billed Gull. As a result, the phalarope began working its way west along the beach and eventually passed directly in front of me offering unbelievable views and occasionally vocalizing. The bird was darting across the water surface, pursuing apparent tiny white moths. The behavior sort of reminded me of White-faced Storm-Petrel, as it danced and darted across the calm water surface. Compact shorebird with mostly pale head and a conspicuous dark eye/ear patch and dark cap. The bird had a thin, “needle-like” bill, similar to Wilson’s Phalarope. Striking back pattern with covert and tetrials surrounding outlined by buff. Also some gray-buff wash on the sides of the neck. The bird called several times while it was feeding but I was unable to get a recording. Quite an experience. Some documentation images supplement this report.