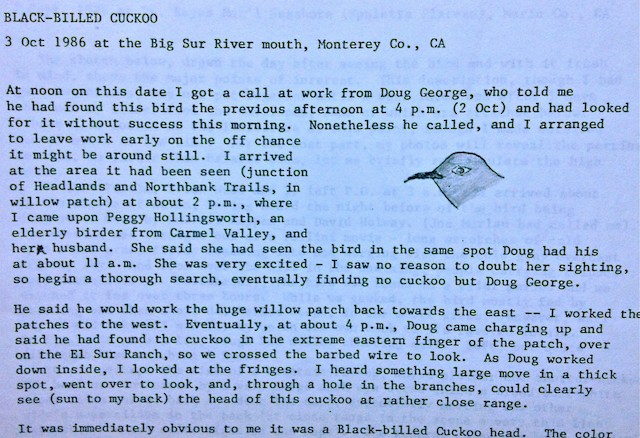 I did a rough field sketch of the head, and typed field notes later these were CBRC accepted]. The "description" part of the field notes read: "I heard something large move n a thick spot [in the willows], went over to look and, through a hole in the branches, could clearly see (sun to my gack) the head of this cuckoo at rather close range. It was immediately obvious to me it was a Black-billed Cuckoo heard. The color was overall warm brown, the dark chestnut-brown eye was surrounded by dull green-yellow bare skin, and the bill was longish, thin, decurved, and all black (see rough sketch made).. Even the base of lower mandible was black. Soon the bird hopped out of sight ... though we worked for the net 15 minutes, I never got a better view. One simply saw the bird move from spot to spot... it looked to be a very small, thin cuckoo uniform in color. When it spread its wings to hop, I could detect no rufous flash -- though the brush was so thick that all views after the first one were very poor." [I left to drive to Big Sur to telephone back to Monterey, and several (including Bob Tintle) arrived thereafter, and though we search until duck, the cuckoo was refound.]