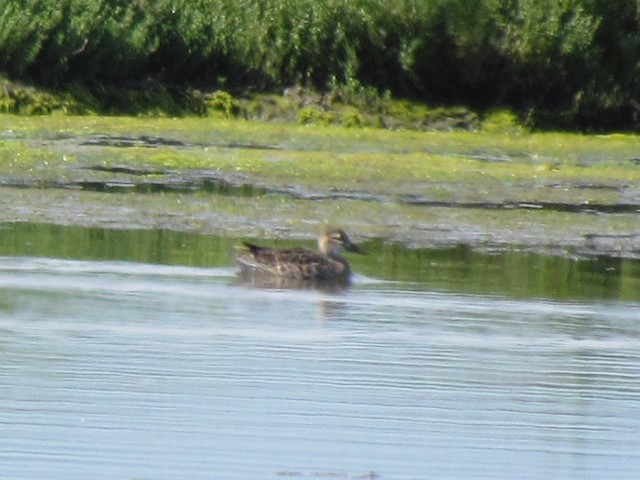 *Edit: accepted by CBRC as record 2019-051. Will add details and submit to CBRC. I still need to review additional resources, ask for more feedback, and type up my field notes, but preliminary it looks like a solid candidate for Graganey. The bird was here south of the dike (37.4405262,-121.9645886) hanging loosely with Mallards. Unfortunately I did not see the bird in flight, and it drifted south into New Chicago Marsh after a while, but we studied it for a good 10 minutes. Identification: small duck, about the same size as one would expect for Blue-winged Teal. Some BWTE and CITE were in the same marsh, but not close enough for direct comparison. Our initial impression was that it was clearly a bit larger and longer necked than Green-winged Teal with a longer, larger bill and a much paler coloration overall. The bill seemed even larger than expected for BWTE. An obvious white spot at the base of the bill, very dark crown, dark eyeline, and brownish cheek were apparent even from a distance. It had an obvious, very pale supercilium extending from just above the lores and across to the nape. It also had a pale line below the eye, outlined by a dark line (but not as dark as the crown) on the cheek. This gave it the classical Garganey-like face pattern. The face was palest just above and below the eye, giving the impression that the eyeline was darkest just in front of and behind the eye. It also had a whitish throat. The forehead seemed slightly less sloped than expected on BWTE, almost with a bit of a bump on the head aligned just in front of the eye. This was apparent both in the field and in the photos (all of the comments here pertain to field marks observed in the field, not based on photos). I can't find reference to such a field mark in any books, but I observed a similar trait on the Graganey in Yolo County a few months back. The bird had mottled, pale brown flanks, and the upperparts were a worn dark brown. I could not discern the tertials very well, in part because they were worn and messy. The feathers on the upperparts were darker in the center and more worn, sandy brown on the edges. The undertail coverts had small brown splotches on them. The duck sat on a sandbar for several minutes, at which point we observed a white belly.