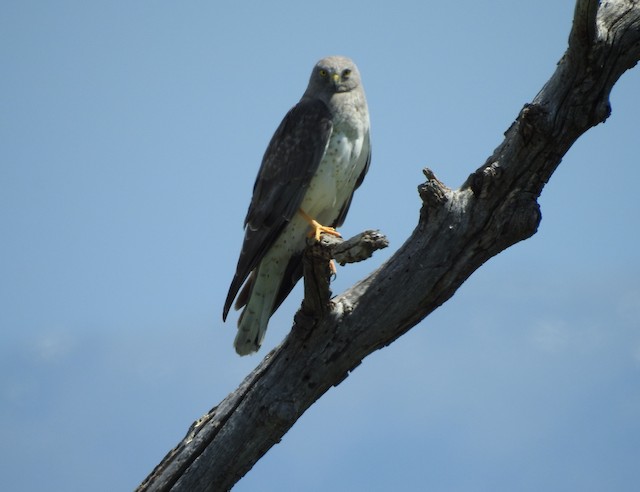 First observation at 0531. 4 counted on property. Additional breeding codes: A. At 0533, saw an adult female with molt gaps in wing and an adult male in flight together over reach 4 and E of there. Then heard the female kakking from a wood fencepost just 3 m E of the property boundary. Continued to observe agitated behavior for the next 15 minutes as I passed by. Frequent kakking from the female, who perched in several places nearby. At one point she flew a few meters over my head. Second pair seen around 1030 (adult male and apparent SY female - not streaky underneath) seen S of the stream at the turnaround point, perching in and flying over the field. Ca 1440, saw an adult flying in from the E in a fast low glide to perch in a Russian-olive in the sewage lagoon area. Mobbed on arrival by an adult male NOHA that continued in an aerial chase to the vicinity of Head Lane. The RTHA was then mobbed there by 4 BRBL. Detections (number 15-minute intervals in which the species was detected): 5 on property. 3 beyond property.