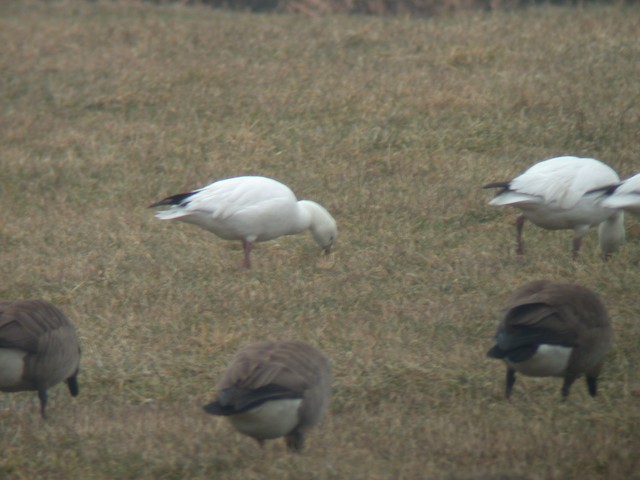 Description (written 6 April 2002 and based on notes from 3-6 April): This Ross's Goose, like most, is a gleaming white bird. SIZE AND SHAPE: Body size and neck length is about 2/3 that of most Snow Geese to which it was compared (considerable size variation in the Snow Geese was noted, with many very large birds present in the flock). The head is petite and dovelike, being softly rounded or even slightly peaked on the crown, lacking the flat-topped crown and heavy jowled appearance of the Snow Geese. This is especially noticeable in profiles where the bill is turned away from the observer. The bill is short, about 1/2 the length of the Snow Geese (a short, steep triangle instead of a long, sloped triangle). The loral feathering forms a straight vertical line from top of bill to bottom, and the bill commissure (line between upper and lower mandibles) is perfectly straight to gape, lacking any black grin patch. By comparison, the Snow Geese show a rounded line of loral feathering that protrudes forward (convex) onto sides of bill, especially lower towards the gape; the commissure on the Snow Geese appears to curve down and then up just before the gape, accentuating the black grin. BARE PARTS COLOR: The bill and legs and feet are somewhat darker, brighter reddish-pink than the Snow Geese present. In close views, a grayish-blue patch was seen on the basal 1/3 of the mandible; this patch extends narrowly across the top of the bill at the base. I could not see any obvious caruncles on this patch, the area appearing smooth (presence of these warts is individually variable and changes with age, sex, and season in Ross's Geese). The dark eye is set just behind the top corner of the bill, appearing tucked in somewhat forward and closer to the bill than the more centrally located eye of the Snow Geese. PLUMAGE: The entire head, neck, body, and tail are bright white. The sides of the neck show obvious diagonal furrows in the feathering. All the primaries are black and show only as dark points beyond the somewhat elongated and pointed lower scapulars. After preening and when stretching, I could see that the upper primary coverts were pale gray with white edging and a dark rachis (shafts). The bird spends most of its time foraging, rapidly clipping the short grass. I did not notice it spending any time 'rooting' or digging the way the Snow Geese were often doing; it spends most of its time on grassy portions of the fields. Vocalizations: Tom Hodgman clearly heard this bird call (singled out as it raised its head), but I did not. Although I grew up in California and have seen flocks of hundreds in the Central Valley and Salton Sea, I don't remember any distinctive voice to this species apart from a soft barking like Snow Goose but possibly on a higher pitch. One reason I don't have a distinct memory, apart from intervening brain cell attrition, may be that Ross's Geese are generally quieter than Snow Geese. Rich Stallcup has noted this and summarized the voice thus (Point Reyes Bird Observatory newsletter): "Ross's are much less vocal than Snows, especially in flocking flight. Flying groups of white geese that are silent should be suspected as Ross's. Snow Geese most often give a series of resonant, slurred "oh-looks" while Ross's, if they speak at all, give but an occasional quiet, "ugh," "kug," or "aw-aw." No voice recordings were obtained.