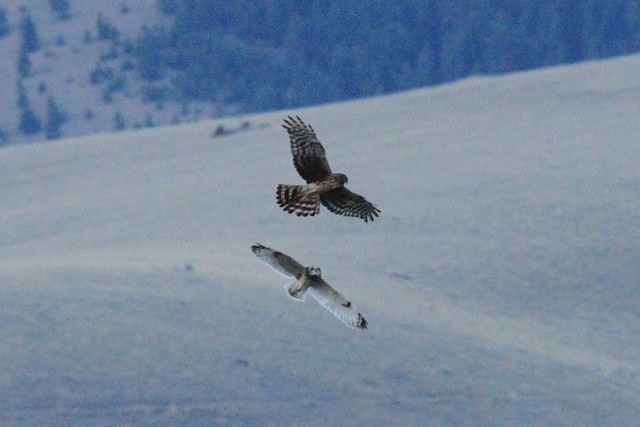 First observation at 0611. 2 counted On Property. Additional breeding codes: T. First bout of activity seen between 0611 and 0625, then a lull. 2 males (both with very white bellies) flying low over the field in reach 4, NW and SW of the start point. Observed several wing clap series in flight from at least one of them; also several times observed both owls in low flight, then pulling up to meet each other in brief aggressive interactions, facing each other. Also saw 1 in low flight over the field in reach 4, between 100 and 300 m S of the stream, with a male NOHA in aggressive chase-type interaction. At 0649, saw 1 SEOW again in low flight over the field S of reach 4 (S of point count P1); then saw it interacting with a defensive female NOHA in the same area where the NOHA courtship feeding observed. Heard her making 'kek kek kek' calls; also saw male harrier in the vicinity. Did not see the SEOW after 0651. Then at 0710, again saw 1 SEOW briefly flying over the reach 4 field; the female NOHA once again acted defensive (perhaps taking off from the ground here?) At 0722, briefly saw 1 SEOW in low flight over the sewage lagoon area; this was the last sighting of the survey. Detections (number 15-minute intervals in which the species was detected): 4 On Property. 1 Beyond Property.