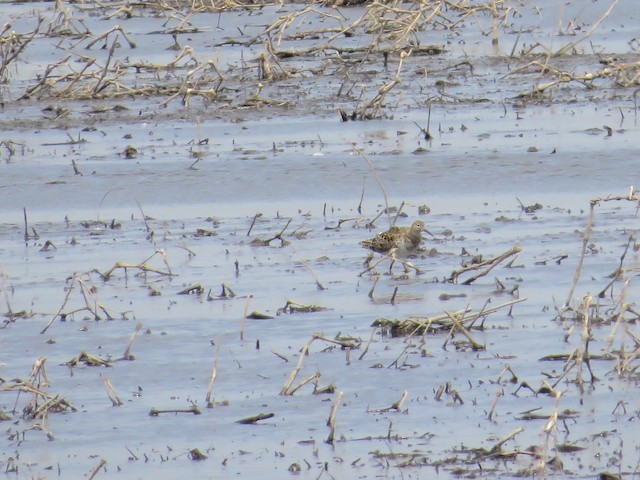 Continuing bird, Reeve - west pond on FDL side near historical marker. Feeding with PESA, LEYE, GRYE, AGPL, and BBPL. Browner overall than the LEYE and GRYE. Taller than PESA, AGPL, BBPL, and LEYE, shorter then GRYE. Bulkier/plumper than PESA, LEYE, and GRYE most similar to AGPL but most to BBPL. Head was rounded, head, face, neck and upper chest medium brown (similar to PESA but was more a reddish tone). Lower breast to undertail coverts was white. Upper breast and side had some large dark spots. Bill was PESA shaped (and slightly downcurved) unlike GRYE or LEYE and appeared all dark. Back feathers were strikingly marked; with dark centers with buffy margins. Legs were greenish gray. Bird raised its wings once, I could see its white underwings (photo) and in-flight note its U-shaped white band on the tail. Unlike the other shorebirds, when the wind blew in the right direction it’s tertials would wave in the wind. I relocated it a couple of times when I saw this. Not sure if this is a characteristic but it worked. Will add photos. Have decent video too.