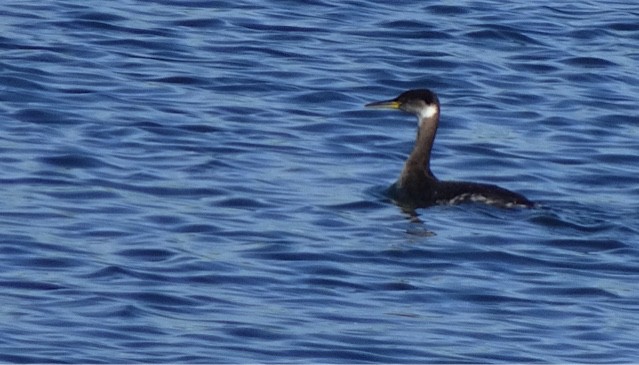 After viewing the Black Scoter in my spotting scope, it was hard to get excited about counting the remaining birds present, but I did my best. I drove to the end of the paved road where it meets the dam as usual and did a U-turn. I noticed this grebe at that corner, closest to me. As soon as its head emerged from the water, I realized it was a Red-necked Grebe! I managed to get a couple poor photos with my point and shoot camera, attached here. This represents the fourth record of Red-necked Grebe for San Benito County, and the first record since 1998. As the images show, it is a large grebe with a yellow-based bill, dirty white checks, dark cap, reddish coloring coming in on the neck. It was also present the next day, April 7, 2019 when I returned with Jim Lomax, John Luther, Steve Rovell, Scott Terrill, and Linda Terrill. On this day, the Red-Necked Grebe was too far away for photos. In fact, it was in the same scope view as the Black Scoter. The three other records of Red-Necked Grebe for San Benito County are: April 28 to May 6, 1973 found by Keith Hanson at Bitterwater area; February 22, 1998 found by Debi Shearwater & Al DeMartini at San Justo Reservoir; December 27, 1998 at San Felipe Lake found by Todd Easterla. It is interesting to note that 1998 was the last year when our reservoirs were high. 1998 was also a very big El Nino year for rainfall in San Benito County. We've had El Nino years since 1998, but none has managed to dump as much rain as 1998. We've also had at least 7 to 8 years of severe drought recently. This year we are experiencing an El Nino and having good rainfall, but the reservoirs are not quite as full as 1998. Just some interesting random thoughts about these findings. Also, I found 3 Surf Scoters at Paicines Reservoir in 1998.