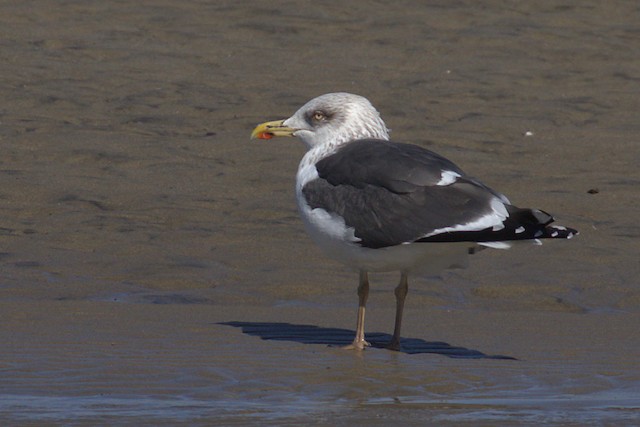 This returning, adult Lesser Black-backed Gull, present in past seasons and relocated this winter on 13 February 2019 by Nick Lethaby, was photographed here by Curtis A. Marantz on 16 February 2019 at the Santa Ynez River mouth, Vandenberg Air Force Base, Santa Barbara County, California.

This bird’s plumage patterns and coloration were like those of the adult Western Gulls, albeit with a few key differences, some of which would be unique to this bird even as an adult Lesser Black-backed Gull. The head, neck, and underparts were basically white. Although I cannot be certain that the lores and forehead were unmarked, I am confident that they had fewer markings than did the other parts of the head, so they appeared to be essentially unmarked. Quite conspicuous was a large smudge of sooty to blackish around the eye that appeared solid and without an obviously streaked pattern. This smudge extended some distance above, below, and both in front of and behind the eye, but the lores, crown, lower part of the face and the rear part of the auriculars were all mostly white. Further apparent on the crown was fine streaking that appeared to be sooty in color as opposed to obviously black or brown. The streaking that characterized the back and sides of the neck was similar in color, but it was broader and more densely packed. I nevertheless thought the streaks on crown and on both the back and sides of the neck were short and well-defined, which resulted in a pattern that was different than the dark smudging that characterizes some Western Gulls. The mantle, and for the most part, scapulars, wing coverts, and tertials, were slate-gray in color. I noted a small, white “scapular crescent” that was essentially hemispherical, and a more aptly named “tertial crescent,” from which a narrow, white band extended inward as a wedge across the tips of the visible secondaries. Further apparent on the closed wings was some dinginess on the wing coverts that may have had a brownish cast, despite not really appearing to be brown. The black primary tips contrasted conspicuously with the slate-gray of the coverts, tertials, and what I could see of the secondaries. Each of the five primary tips that I saw on the upperside of the closed wing had a rounded spot of white at the tip, and further apparent on the underside of the far wing were white “mirrors” near the tips of the outermost one or two primaries. What little I could see of the tail when the bird was on land appeared to be entirely white. When I saw this bird in flight, I concentrated on the plumage patterns, and especially those of the wings. This bird had a conspicuous wedge of white on the primary coverts that was narrowly divided by a dark band that divided the white into two tapered patches. Also apparent was that the back and the upperside of the wing were mostly slate-gray, but with a relatively narrow band of white along the trailing edge of each wing, and black wingtips that had white spots that did not appear to continue conspicuously onto the inner primaries to form a “string of pearls” pattern when seen either from above or below. The white mirrors on the outermost one or possibly two primaries were again evident, as was a pattern on the underside of the wingtip that was like that on the upperside, with white spots on a generally blackish background. Further apparent was a dusky band that extended inward along the underside of the wing between the white underwing-coverts and the white trailing-edge. Finally, I noted that the rump and tail were entirely white. The bill was mostly yellow; however, the basal part was a lighter and duller yellow than the distal part of the upper mandible, which was a deep-yellow in color. Further apparent was a red spot near the tip of the lower mandible that was bordered on the inside by a black mark that appeared square in shape, and on the upper mandible, what appeared to be a narrow line of blackish that extended horizontally through the nares. The cream-colored irides contrasted with a narrow orbital-ring that was bright red in color. I thought the legs were pinkish-yellow to yellowish-flesh, as opposed to the obvious yellow that I usually associate with adult Lesser Black-backed Gulls.