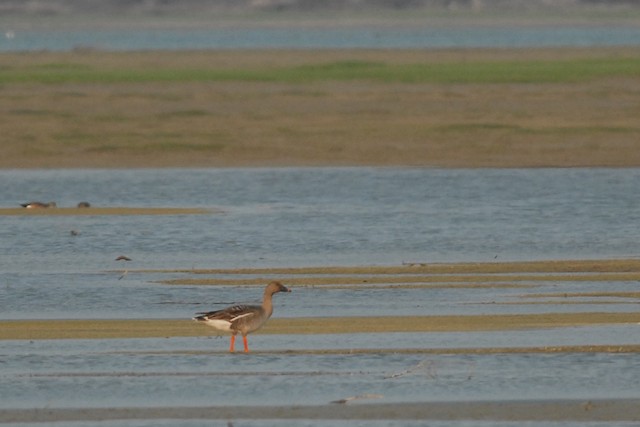 Cameron's notes; We were birding on the outer flats at the south end of Lake Laberge when I spotted a large lone goose flying in towards the flats; from a distance it looked like a Greater White-fronted Goose; but even before it landed I was stunned to see the bill colour was black with a pink/orange subterminal band which I immediately recognized as a Bean-Goose. I had found a Tundra Bean-Goose in Whitehorse in October 1999, and so was familiar with the identification characteristics of Bean-Goose species and subspecies. The Bean-Goose which landed in front of us at Lake Laberge appeared very different with a much longer bill, looking wedge-shaped from various angles, with a longer-necked appearance, and overall a much more substantial looking goose. It appeared right off to be a Taiga Bean-Goose. It was incredibly wary, and while we had great scope views, I spent the next hour or so trying to get close enough for decent photos. The photos are not excellent, but they do document how it appeared in the field. We watched it alongside dabbling ducks (e.g. American Wigeon) and Tundra Swans. This was a large brown goose, similar to Greater White-fronted Goose; with a pale brown belly; white under tail; diffuse barring on the flanks; a darker medium-brown back with fairly bright edges on the scapulars, and in flight, the flight feathers contrasted darker brown than the back; long bright orange legs; a tan-brown neck and head, becoming darker brown towards the front of the face; flight feathers appeared very dark brown with pale shafts on the primaries forming a pale patch at the base of the outer primaries; a broad white margin along the greater wing coverts forming a white line; a very dark brown tail with white tips; and bright white rump. Through the scope I scrutinized the bill and could not see an obvious grinning patch - I tried to photograph this and though the resolution is poor, no grinning patch is discernible. We returned to this location the following day, but the goose was nowhere to be seen. Since 2014, when I observed this goose there are now (February 2019) many more Bean-Goose reference photos available on eBird/Macaulay. Additionally, I've heard from others familiar with Taiga/Tundra Bean-Goose who confirmed that my photos support Taiga Bean-Goose. And so I've revisited the identification of this Bean-Goose. The bill colour is consistent with the subspecies of Taiga Bean-Goose most likely to occur in western North America and the Yukon. The size and proportions of this goose, especially viewed alongside a Tundra Swan, shows the large size, long body, long neck, and what is often-described as a swan-like look of Taiga Bean-Goose. While the Tundra Bean-Goose I observed in Whitehorse appeared to be a fairly compact, goose with a medium-short neck, and a short bill; the Bean-Goose at Lake Laberge appeared large, long-bodied, and long-necked. The bill shape was also very distinctive, it was the first feature that really stood out on this goose, after the shock of seeing the bill colour. The photos show a notably long, wedge-shaped bill of Taiga Bean-Goose. The photo angle changes the bill appearance to some degree, though the appearance in the field which is reflected by the photos shows the bill of Taiga Bean-Goose. This is the first Yukon record for Taiga Bean-Goose; and perhaps the first or second Canadian record.