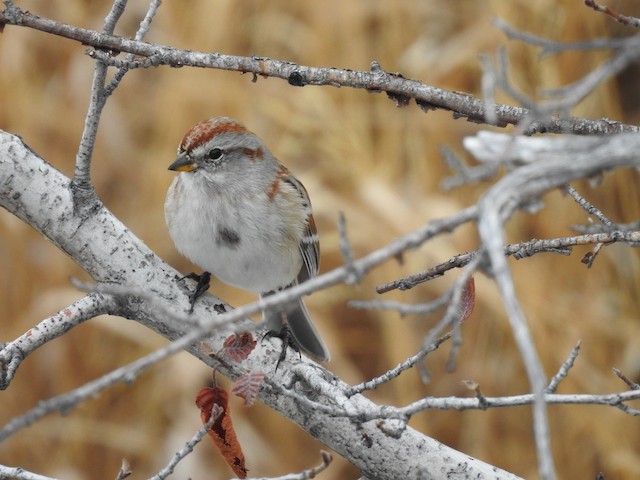 1 singing. First detection at 1024, when I heard BCCH and ATSP calls briefly along the stream E of reach 4, then 3 ATSP flew in towards us and landed in the general vicinity of a Salix (eriocephala?) SW of the nest box. Saw 1 on the snow at the stream edge, foraging briefly - perhaps on insects seen and photographed on the snow nearby? Then at ca 1046, counted 4 ATSP in reach 4 near the red culverts, perched in shrubs. We saw at least 2 and likely 4 of them fly north away from the shrubs. At 1050, another one flushed from just upstream of the red culverts. At 1057, saw 1 more foraging along the stream ca 50-100 m above the red culverts. Then at 1100, another flushed up from the stream ca 100 m above the red culverts, to an Alnus incana. At 1105, saw 3 more in the vicinity of the photo point or 100 m E in shrubs; 2 flew E. Then from 1106 to 1117, counted at LEAST 12 more in the vicinity of the photo point in shrubs and along the stream; observed several foraging on the ice and bare vegetation at the stream edge. Heard a considerable amount of "swi" upslurred calls as well as "tip" calls. Also observed 2 BCCH moving downstream through the riparian shrubs near the ATSP. Also heard 1 tree sparrow sing at least a partial song briefly! Added all ATSP seen to the total after the 2 or 4 that flew to the north - I was quite sure that all sightings after that represented distinct individuals. Through 1143, I continued to see or heard 2 BCCH and a bare minimum of 8 ATSP in shrubs and near the creek in the vicinity of the photo point. Lots of ground foraging behavior from the ATSP. 1147, again I twice heard an ATSP singing, starting with thin whistles and then speeding up and trailing off, a bit reminiscent of a Zonotrichia in quality. At 1159, I saw at least 5 ATSP now foraging near the E seep in reach 3.