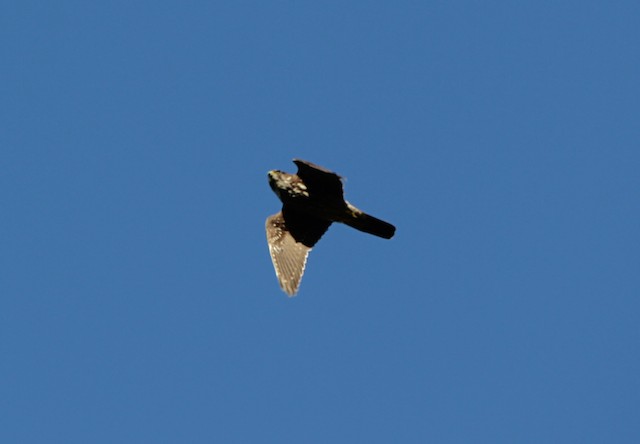 We saw this MERL flying in from the N cruising by at a moderate height and and distance heading S. Lighting was fairly good with the sun at our backs. Our initial view of this bird only lasted a few seconds, but the overall darkness and minimal spotting on the underwing strongly suggested F. c. suckleyi. Thankfully it landed in a redwood outside the residence on Green Valley Road about 250 meters S of Litchfield Lane x Green Valley Road where we chased it immediately. The bird was still perched when we arrived, and we just had a few seconds of viewing it perched before it took off again flying directly over us heading S. The overall darkness on the upperparts and underparts was evident when perched. I did not have a clean look at the head, but it appeared to be rather plain. The breast streaking--being slightly brownish, but still very dark--contrasted slightly with the underparts which were very dark and had no warm tones at all. We again had brief but longer views of the bird when it flew over us the second time. The underwings were very dark and appeared to have little to no spotting on the remiges, with sparse spotting on the underwing coverts. The undertail coverts had a pale base but thick dark brown streaking which was a similar color to the breast streaking. I did not get the best look at the tail, but it appeared to be overall dark with no thick pale bands (there could have been some thinner bands that I did not see). There was, however, a pale terminal band on the tail. The head in flight again appeared overall dark. I could not tell how prominent the supercilium was. Overall, the field marks that were observed well are indicative of suckleyi (and one of the most critical being the plain underside of the remiges) which strongly suggests this was not just a dark columbarius. Several photos of it flying over the second time are attached below.