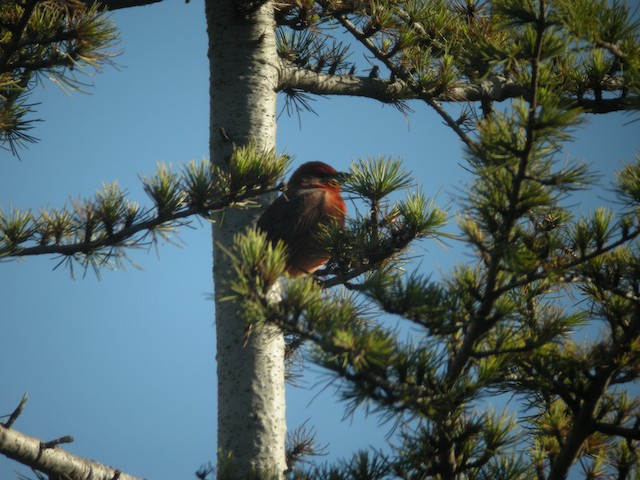 This bird had grayish tones to the plumage, yet it was essentially bright red almost throughout. The forehead and crown were a fire-red in coloration, as opposed to the slightly more pinkish-red of a male Summer Tanager or the scarlet-red of a Scarlet Tanager. The red of the crown extended back to about the nape, where it blended to the more grayish shade that characterized the back. The dusky-gray lores contrasted conspicuously with the red crown. Also evident was a band of medium-gray that extended narrowly under the eye before expanding across the auriculars, which had a distinct grayish cast throughout (and as such, they contrasted sharply with the bright red that characterized both the crown and the throat). As far as I could determine, the grayish shades in the face extended down only to the lower edges of the moustachial and auricular regions, so the submoustachial and malar regions were the same fire-red color as the throat. The back and scapular feathers had medium-gray centers that contrasted with fringes of deep red to produce a pattern of indistinct scaling on a gray background. I cannot now recall seeing clearly in the field either the rump or the upperside of the tail, but my photographs reveal that the former was red and that the latter had at least some red visible. The wings were generally dark and reddish, but closer inspection revealed a contrast on both the coverts and remiges between dark grayish centers and deep red fringes. On the median coverts, the fringes extended down the outer edge and across the tip of each feather to produce a scaly wingbar that was largely obscured by the scapulars. The greater coverts also had reddish fringes that contrasted with dusky centers, but the more elongate shape of these feathers resulted in a pattern of elongate stripes that each curved inward across the tips because the fringes were somewhat more conspicuous along the edges of these feathers than they were at the tips. The primary coverts appeared as a small, dark wedge along the leading edge of the wing near the shoulder, yet close inspection revealed that even these feathers had dull reddish fringes along their outer edges that contrasted with the dusky tips. The remiges likewise had dusky centers and contrasting fringes. On the innermost two or three pairs of secondaries, the fringes may have been reddish basally, but they faded to pale gray (if not dingy whitish) along the edge near the tip. The remaining remiges, by contrast, seemed to have dusky centers that contrasted with fringes that were the same deep red color as those on the coverts to produce a pattern of fine striping on an otherwise dusky wing. As noted above, the throat and breast were an even brighter shade of fire-red than that which characterized the crown. The red also flared outward to include the submoustachial region, the entire throat and breast, and maybe even the sides of the foreneck; however, the flanks were conspicuously washed with grayish, even though they too were essentially dull red. I am less sure about the belly, but I suspect its coloration was intermediate between the bright red of the breast and the dull grayish-red of the flanks. The undertail coverts were again a moderately bright shade of red, but I never was able to see the pattern or coloration on the underside of the tail. This bird's upper mandible was entirely black, but the lower mandible was primarily a steely bluish-gray basally before blending to black at the tip. The eyes were dark brown, but I failed altogether to notice in the field the coloration of the legs or feet (though my photographs reveal that they were dark gray to blackish).