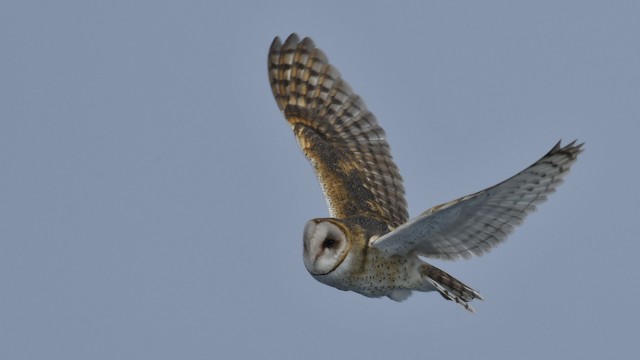 As decribed, the bird was seen actively flying behind and around the vessel. As the bird was seen the following day, we assume that the bird had been ships-assisted during the night. A search on the ship was done on both days with a negative result. Since the bird was seen souht of 60 degrees south it may count as the first observation of this species in Antarctica, when accounting 60 degrees as the limit for Antarctica. I have banded barn owls in Denmark, and hence recognized the bird as this species. Recognizing its very widely distributed and occurs in a large number of subspecies, it fits well with the description of the subsp. tuidara. Since an unidentified white-rumped swallow was seen flying around the vessel initially, together with the owl, I got the impression, that some atmospheric conditions that had favoured birds spring migration had occured, and for some reason, these two birds had overshot their migratory goal and ended up at sea, being attracked by the presence of the vessel.