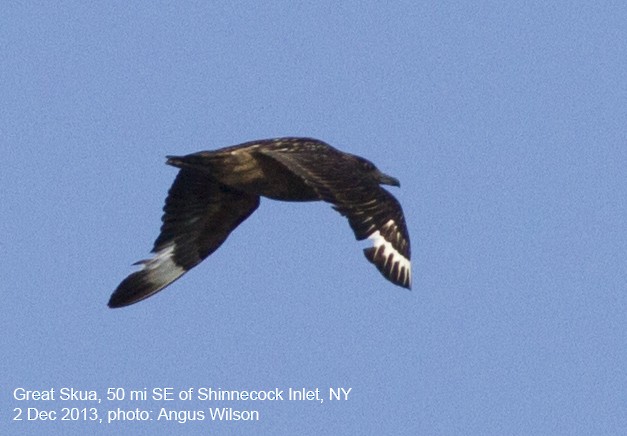 AMAZING! What a thrill. Increasingly rare it seems in New York State waters. We had three separate encounters of what we thought at the time must be the same bird but scrutiny of our photographs clearly showed to be at least two separate individuals. The first bird came directly at us as we approached a distant dragger but zoomed right past (typical). We turned and gave chase at full speed realizing that it was headed straight for two draggers some six miles behind us. Reaching the draggers we did not see the bird immediately but eventually spotted a skua attacking a Great Black-backed Gull. Interestingly the gull was having none of this and was soon chasing the skua which promptly gave up and departed the area. We managed a few shots but the birds were distant. Having checked out the draggers for a while we turned for home and were speeding along when another skua cut across our path. This was 12 miles from our last encounter. We gave chase at 34 knots and managed to pull up alongside, although the bird gained some altitude. Realizing it was not going to stop we pulled ahead slightly (a remarkable feat in itself and credit to Cpt Shemilt), slowed rapidly, took some quick photos, and waved goodbye to this very impressive bird as it continued on the same vector. All three birds were clearly Great Skuas based in part on the golden flecks on the mantle and dark hood with pronounced capped effect. Primary molt seemed consistent with current thinking on large skua molt and we noted several clear differences between the first and third birds, including a mangled primary on the left wing of the third encounter individual that was not present on the first. A fuller selection of images together with a detail assessment of the molt state and justification for why we think there were two or more birds will be included with our NYSARC reports.