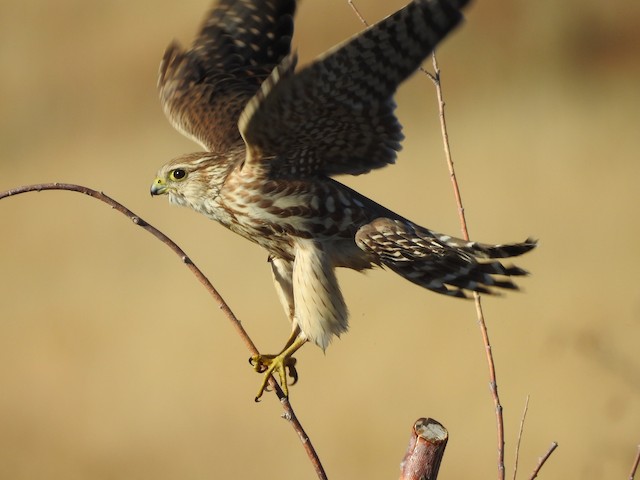 Flew in from the S or SE at 1621 and perched 1 m high on a dead wood branch in the new section of reach 3 at the stream edge. Observed until 1626 - perched quietly, looked around, and groomed foot a bit. Gone at 1626. At 1633, the MERL reappeared perched in a planted Salix ca 20 m E of the wooden board spanning the stream. At 1641, it glided down from the 1.5 m high perch to the creek vicinity and disappeared, out of sight. At 1643, a BBMA perched near the bank of the stream nearby and made occasional calls, then flew off as I got within ca 40 m. At 1647, the MERL reappeared, flying up (to the Salix) without prey from the stream near the plank bridge - had it been bathing, or drinking, or hunting? It seemed to struggle with balance a bit - flicked wings open several times and spread tail. The final photo I got on this perch was of takeoff. At 1649, it flew WNW to perch in the top of an Alnus incana near one of the ponds. at 1653, it flew on upstream after 5 AMCR flew by, also heading upstream. It closed the distance between it and them, then dove (whether on a crow or something else, I couldn't tell). This was my last sighting of it on this day.