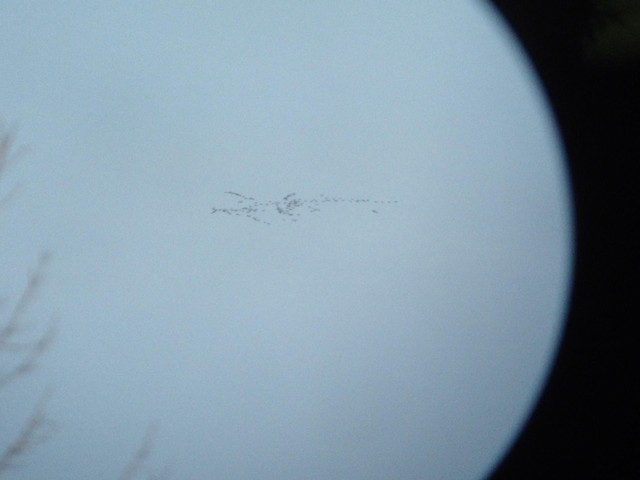 **rare; my dusk watch for migrating coastal birds paid off as a huge dense flock appeared at 20:14 just below the large white tower. I scoped it and was able to identify the birds as Brant. This identification was based on 1) the fact that relatively few species might occur in large flocks like this in May, including only shorebirds (e.g., Whimbrel, Black-bellied Plover), Double-crested Cormorant, Glossy Ibis, herons, gulls, terns, Canada Geese, or Snow Geese. Some of these (e.g., Snow Geese) are exceedingly unlikely on this date; 2) the rapid flapping speed, heavy bodies, and loose lines that were constantly shifting, changing the flock leaders, eliminate shorebirds, gulls, terns, herons, and Canada Geese, which retain their flock leaders more consistently; 3) the pale bodies were visible in the scope and eliminated ibis and cormorants, but were not whitish like Snow Geese; 4) this leaves only Brant, which is a perfect match for the inconsistent lines, shifting flock leaders, and migration on this date. Cormorants would be the main contender but their shifts in the flock leaders are much slower while Brant have parts of the flock that rapidly overtake other parts. I think the photos support the ID. They continued on a line due north, parallel to the east side of the park. The one previous record was on a similar evening and similar time, but a much lower, smaller flock that was flying a bit more northwesterly. Two digiscoped photos, with counts I estimated at 210 and 180.