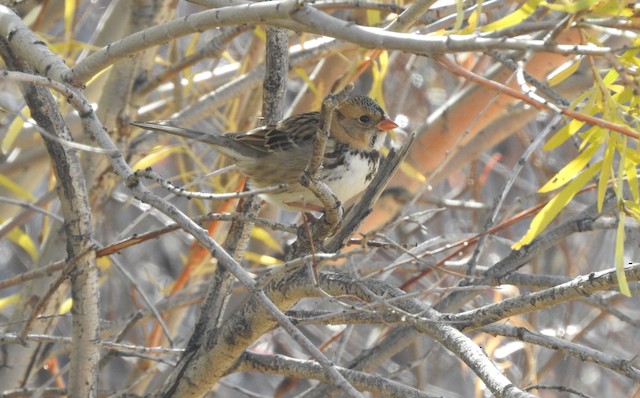 At 1447, 2 HASP flew up from mostly dry, ca 2/3 m tall Agropyron cristatum and A. (intermedium?) about 25 m E of the cross-fence and perched mostly hidden in a Salix exigua. Got a great look at one and finally both: large, richly patterned sparrows with speckled black band across breast and large pink bill. Heard (from them?) a single rendition of song with plaintive notes on a few pitches like WCSP, but with harsh chattered beginning. Then heard a few soft (contact?) calls - lispy like WCSP but seeming to drop a bit and then rise, like "seew?". Then both flew to a mostly bare Prunus virginiana nearby. At 1607, having waited several minutes, hearing scratching in the leaf litter near the creek, I saw a HASP appear about 1 m high in a Cornus sericea overhanging the creek, where I observed it grab a fruit before it flew out of sight in other shrubs. This was about 25 m E of the previous sighting. AT 1615, having stood still a while, I rounded a corner and clearly saw THREE HASP perched within 2 m of each other, about 1 m high in a Salix exigua, a bit SE of where I had previously observed 1. They flew on farther soon, but I got photos of 2 individuals.