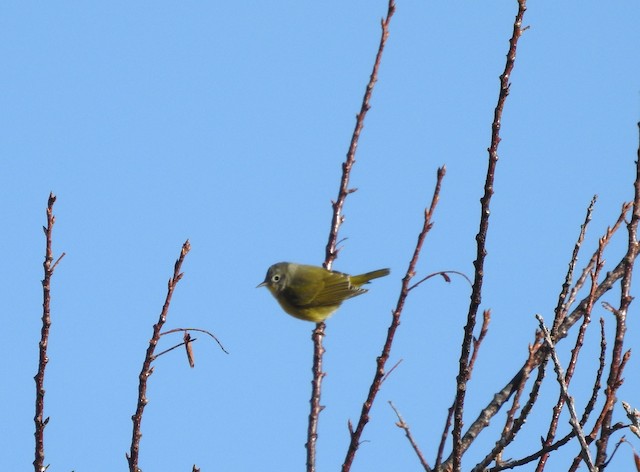 First heard an unusual call and glimpsed at 0918, at which point I had not yet identified it. Pale yellowish overall - not COYE, YRWA, or WIWA. Not easy to observe. Heard and seen again, very briefly, at 0932 in a Prunus virginiana at the very E end of reach 4. Heard and seen again for about 1 minute at 0946, in a part-dead P. virginiana clump at the E edge of reach 4, apparently foraging, along with 1 ATSP. Flew up to a bare branch near the top a few times. Then flew SE out of sight, at least 100 m away. Small; I thought I saw sharp bill, and generally yellowish, including the breast and undertail coverts. I thought I saw grayish on the head and maybe white eyering. Very active and hard to get a look at it. At 0951, I heard calls again from likely the same warbler, from the E - sounded a bit similar to "tink" calls of ATSP (which I heard a bit earlier), but more emphatic, with a slightly COYE-like quality in that respect, but definitely sharper than the COYE call. Also heard "seep" flight calls before it flew into the same Prunus virginiana at ca 0945 - these calls reminded me of YRWA flight calls. Finally got some decent photos, though still not great views, and confirmed definitely a NAWA: very clear, complete white eyering and yellow chin.