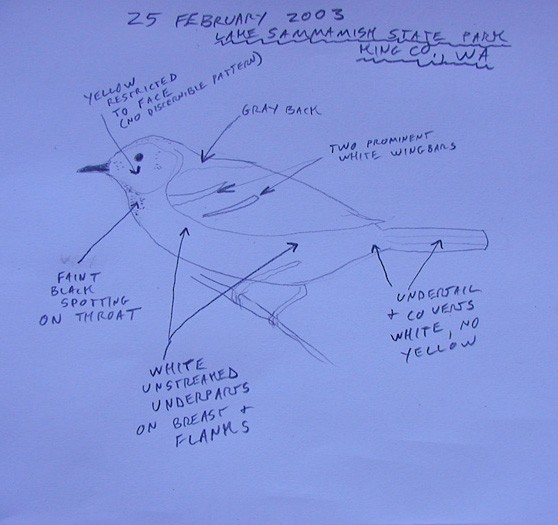 From notes taken in the field

This is the record cited on page 250 of NAB Vol. 57 No. 2 and page 314 of Wahl, T. R., Tweit, B., & Mlodinow, S. G. (Eds.). (2005). Birds of Washington. Corvallis, OR: Oregon State University Press. --1st ed. I found my original notes recently that go along with the sketch: "The yellow on this bird was restricted to the face and head only. There was no discernible face pattern - yellowest immediately around the eye with a faint small olive blotch or two in other spots on the face. It's back was gray. I could discern no yellow on the breast, flanks, or vent. The tail was relatively long and the central undertail feathers were white out to the tail tip (relevant?). Underparts were largely unmarked. I saw no obvious streaking along the flanks or breast sides, perhaps only a fleck or two. The throat had a sprinkling of black spotting and dark hind crown spotting also helped set off the yellow face. It had two crisp bright white wingbars."