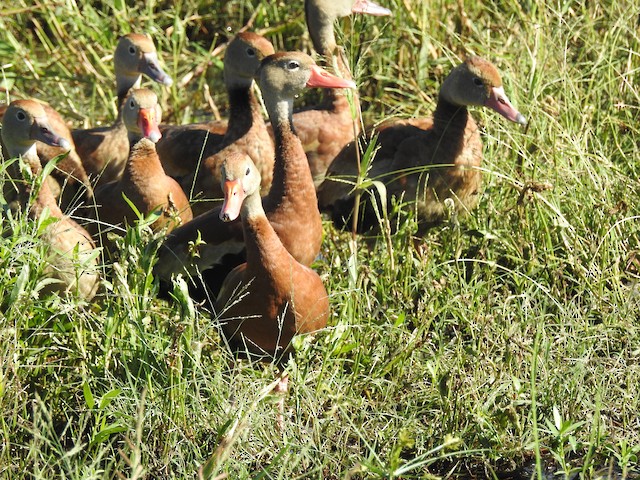 Both mature and immature ducks remained motionless in the grass near the blind at Turcotte Center.

At the duck blind in the pond at the Turcotte water fowl preserve, Eleven ducks were grouped together, hiding in the tall grass. When I first entered the blind, and saw the ducks frozen in one position, The ducks, both adults and immature individuals, were so motionless that I thought that someone might have left a collection of decoys. After several minutes, a head would turn, or a neck would extend, and I realized that they were indeed real ducks. I took several photos, and left the site for an hour or so. On returning, I found that this group had joined another group on the far side of the pond. The two groups had become one, and they spent most of their time eating in the grass, staying hidden in the grass. Every five minutes or so they would be frightened and as many as 17 individuals would take flight, circle over the pond, and land in the grass to resume their feeding. A photo is attached showing nine of the ducks circling over the pond. No other varieties of ducks were seen at the pond. I was surprised to see so many of this variety, as I have never seen any of this variety in my several years of birding in Mississippi .