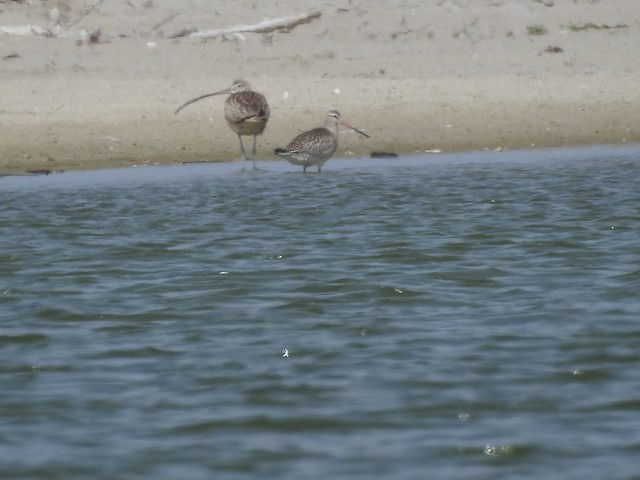 I arrived to find a small group of birders looking for the godwit (Joan Lentz, Wes Fritz, two Brads), without having had any luck since they had arrived. Shortly before 12:45, a group of godwits flew in from the south and landed near the tern flock in the northwest corner of the estuary. Within that flock, we were able to pick out an all gray godwit with shorter legs. With some study, I could see a lighter colored tail with black barring, what appeared to be a streaky back, and light supercilium. Photos show a patterned back like a juvenile rather than streaked, as well as a white underside. Compared to the marbled godwits, this bird was not as obvious as we would have expected, but once it was located it was easy to see this bird was shorter and grayer (no brown/cinnamon) even with binoculars (though a scope is strongly recommended). Shortly before 1 PM, it flew back south and toward the ocean just as quickly as it arrived. It appears to forage along the shoreline and out of view while not roosting near the estuary. Others took photos, I did not. Photos below were taken by Brad Hines.